I know on the old forum, theres still Burel's Attack tutorial and Opa's early game nvidia tutorial for early game. Theres a few other good ones. But the one lacking is for how to effectively attack.

I generally play with a smaller team so i tend to have newer players and tend to have a lot of wings i try to help out. Consistently across the board. EVERY player ranks improves by several hundred but improving their attack strategy.

Even with willingness to fight, you'll find after this tutorial its more about def layout on your target, then actual size.

First off, lets find a Outpost. So here is one below. Ok so heres my Target. Now heres my baby army. The typical player will attack one around the same level or 2 levels higher.
64k tib, 55k cy, 72k credits and 64k research.

a good player will keep attacks 16cp or lower so you can attack about 12 times a night. So lets say in a perfect world we multiply your difference between a good attacker and a poor attacker, you see its a lot in a single day.

As you can see a mathematically, the better you attack, the fast you will grow. This is how i played with minimal funds and was able to out pace players who max crates every single day.

Since tib and cry is coming in so much, it makes it easier to base build your main. early on, i just focus on power and credits.

Ok so now we know the math! lets move to ADVANCED ATTACKING!!!

Lets break down the def on the OP.

1. The first thing is i look for the CY and look for "a path to victory" everything from Chess to Street Fighter V. The key to any strategy is to preplan and find your path to victory. What i will do is look at the columns leading to the CY and ask these 2 questions.
1. Do i have anything that will block a vertigo hitting the CY?
2. If so, can i move it?


Looking at this layout i see i have clear lanes, and def units can be moved. Then i move to step 2. MY GOAL ISNT TO KILL THE DEF, MY PRIMARY GOAL IS TO HIT THE CY.

The biggest mistake players make is they always try to smash the def with the same army over and over again. They key is to distract the defense and put your bomber on target. I used to say, its a lot like american football. You a quarterback calling a play. Once you set your play, your goal is to split the defence and put the ball in the hands of your reciever. NOT smash everybody on the field (GDI i feel is more like the NFL running game but thats for another day)

BLOCKING: if you notice theres a "X" on the screen. The purpose is to show how i want to draw the infantry to the left and to block the scrapbus at the very back.

So here is my attack. 1. If you notice the bulk of my army is not attacking the CY side. My focus is to bait the left side and then slip my vertigo down the right side. NOTHING ELSE.
2. With this strategy, all you really need is ONE big vertigo. The rest of the units is just bait. You'll even notice a lvl 1 rocket squad. Levels dont matter TOO much. you just need them to stay alive.
3. I balance the attacks so each wave i have BAIT to make the units in my CY lane to keep moving left.
4. Vertigos that are small are place to the side of the big vertigo to help cushion the main attack Vertigo.

TIP: Make it a habit to watch your attacks. ALL top players watch their sims. Attack, look at it, then adjust a few units and sim again. make a Habit of doing this a min of 3 times before you hit the attack. Dont just move them and look at the stats window. Actually watch the move units to keep the def units positioned or blocked the way you need them too.

Now here is how the attack plays out. 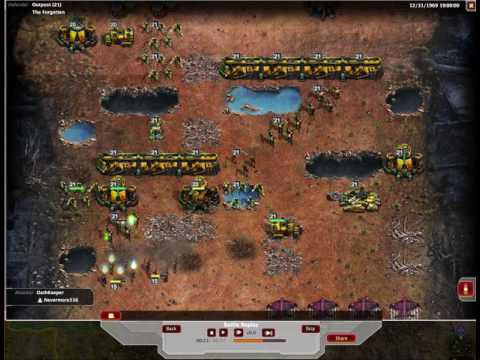 Attack notes:
When you watch the attack it should outline what i was trying to do.
1. Move units out of the "path to victory" and keep them on the left side.
2. The anti-air units will only move once the air unit in their range is dead. So By keep small level vertigos beside it, it keep the anit-air units from moving quickly. Slowing down their attacks so my largest vertigo can hit the target. The venoms is to give them a reason to move to the left in the first place.
3. It does not matter how much bigger a base or OP is by using this strategy, you only need a few more attacks.
4. you can with a large enough vertigo or stacking your 3rd and 4th wave so two large bombers can hit the CY and 1 shot the OP.

TIP: Def units will always move to intercept the specialize unit its supposed to defend. If you look at the top row. By using a infantry bait, i can use that top infantry unit to BLOCK the scrap bus at the very top. Locking it into place to keep my path free to hit the CY.

Players doing this, will grow 3-4x faster then players who spend all day worrying about production or other things. Your production will help you maintain your rank when your busy, but if you want to climb the ranks you need to attack more effectively.

Not every top 50 player max funds, but every top player will be a master Sim and base killer.

Some additional Q&A:
What happens if you have flaks and a scrap bus at the very back?
A: skip it. early game move your base and scan.

What happens when im digging and i cant get a easy shot at the CY?
A: If you have to take multiple attacks to kill a big base, then your first 3 is to soften whats blocking your path to victory. So by 4th or 5th you can begin bombing the buildings to the CY.

I dont have money to buy a week of RT!
A: You dont need a week of RT. because you bait units dont need to be high. You can keep your army low. and conserve RT. Keep 1-2 units and make them SUPER big. So when you do need to smash the def, you use the low level unit to cushion your big unit and let your big unit clear the way for your later attacks for the vertigos. but generally speaking this style of attack if your big vertigo goes undamaged it doesnt cost too much RT maybe 1hr30 min an attack. But nothing over 2 hours.

it takes a lot of time?!
A: it gets easier, after a while you can glance at layout and know if you can kill it in 1-3 hits. But the key is practice!The more you do it, the faster youll get. try this for a server and by your 2nd, you'll be able to glance at a Op or Base and know what you can or cant do just with a glance.

What if i started late?
A: well, play anyway. I always saw this as a game. I never impressed a girl when i told her i had lvl 65 avatars or how i was the head of the 5 deadly families and had 1000 players under my command. its a game, so have fun. The most fun of these games is learning.

However it does work. I was watching the WCS and it was going SOOOOOO slow i just asked for a wing spot and started farming like this. I averaged 200 ranks gained a week. I started a month late. but as of today when i drop b4 i will have lapped 3/4 of the server. So strictly by using effective attacks you can make up HUGE ground. Even with out big bonus or good location.

Final note, the important thing to take away is you should always try. often with a strong strategy and time to figure things out. You can accomplish amazing things. Often players see levels and numbers and give up with out trying. t first glance the OP look like it would take 6-7 attacks to kill. But yet its a two shot.

Anyway, any questions please let me know and i hope this helps out a lot of people who are learning the game. When i started out, top players never told me ****. So this is my way of giving back to all the plaeyrs going through the same thing. I may do more but will see what my time is like. still semi-retired from the game. Just farming in wcs so i may do more if players want more info.