This time around, players will embark of a trip across the country to recruit some of the best players the NFL has ever seen. This Roadtrip to the Turkey Bowl sends you on a journey from stadium to stadium to add players to your lineup in pursuit of the ultimate prize, a Turkey Bowl victory! 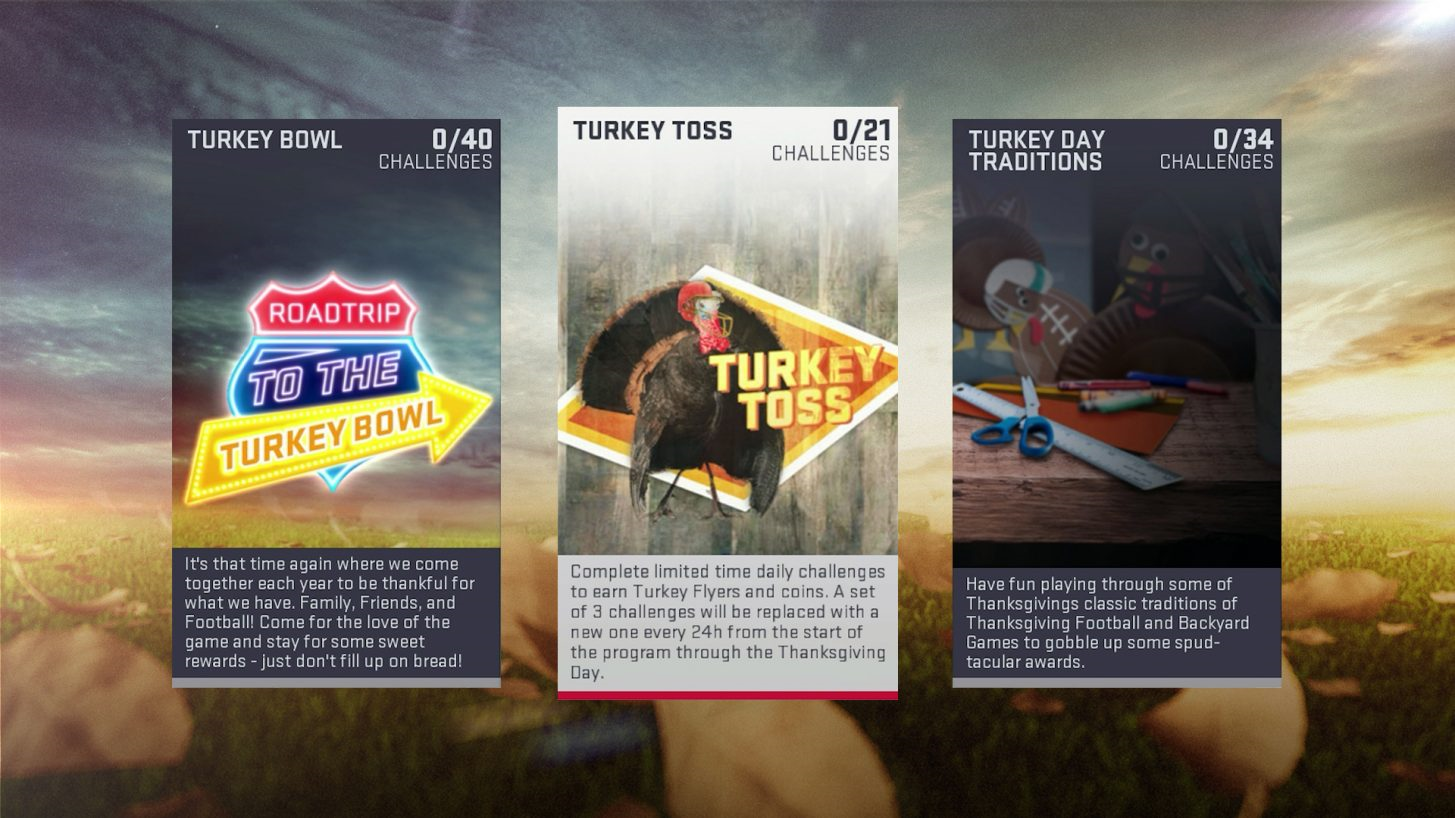 Daily content drops come from Turkey Toss. Earn Turkey Flyers and Coins by completing limited-time challenges. Those Flyers can be used in Sets to acquire better NAT players to fill out your Ultimate Team roster. These events and more are coming your way through Harvest. 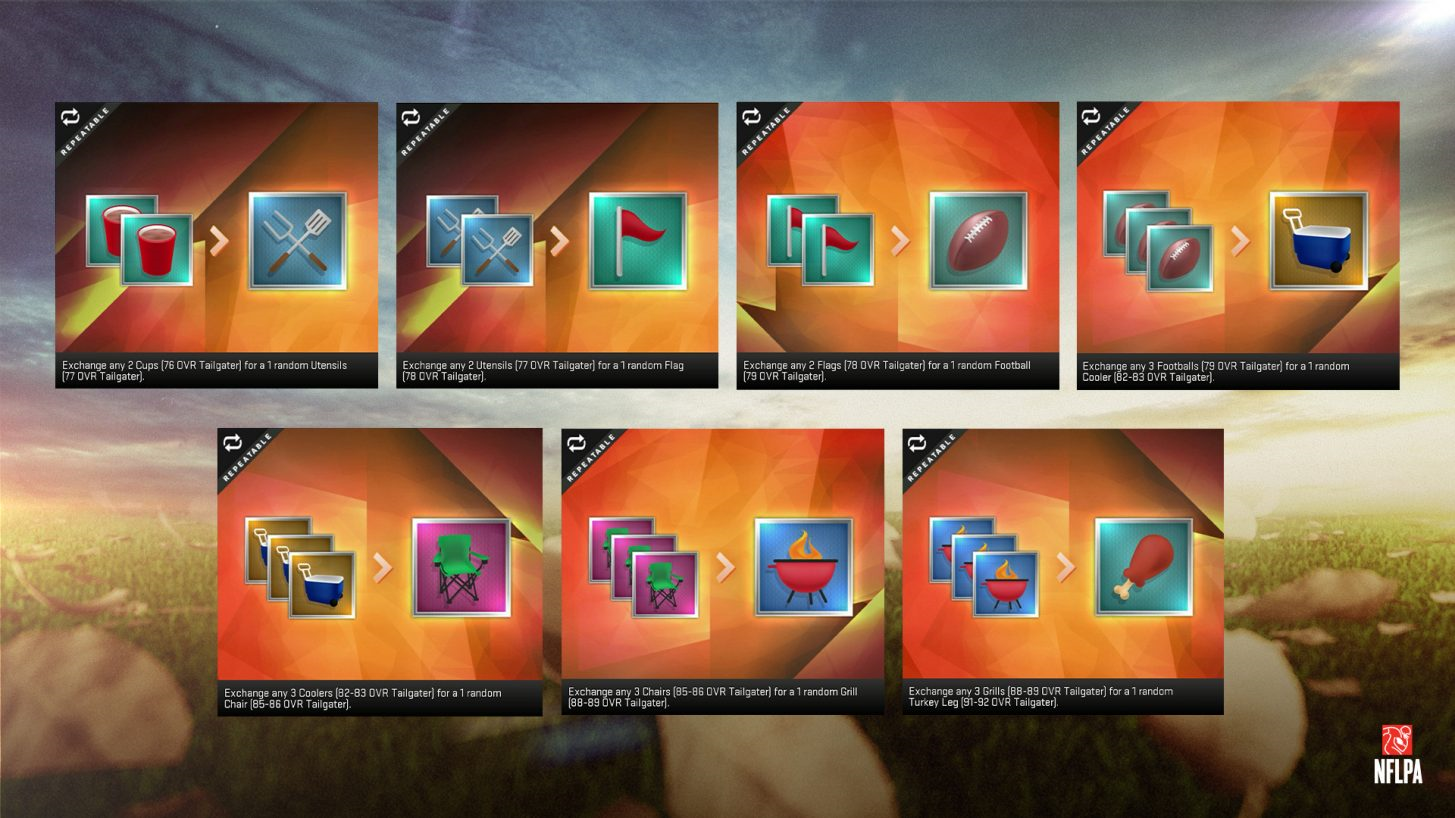 One of the new items coming with Harvest are Turkey Bowl Tailgaters. Acquired through Packs and events, Tailgaters bring something to the party with specific icons, all themed around pre-kickoff festivities.

Those icons indicate which Set these players can complete for upgraded items. Four Elite and four Gold Tailgaters can also be used in Sets for and Offensive or Defensive All-Star. 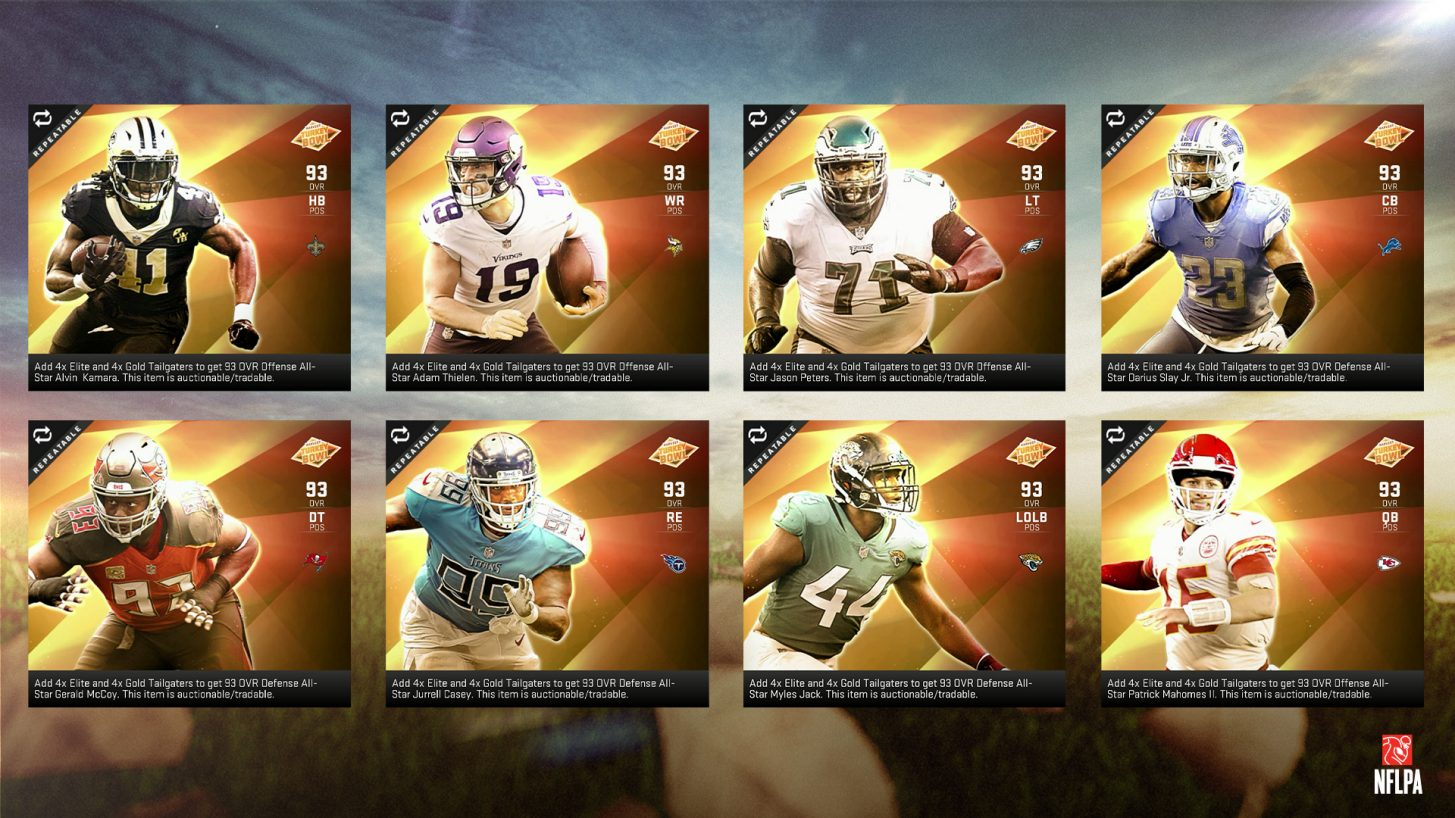 There are 32 Tailgaters available, and here’s how they breakdown:

Turkey Trotters also enter Ultimate Team, bringing in some player morph action that the Madden community loves in other programs like Most Feared. But instead of changing proportions, it’s the ratings that change this time around. 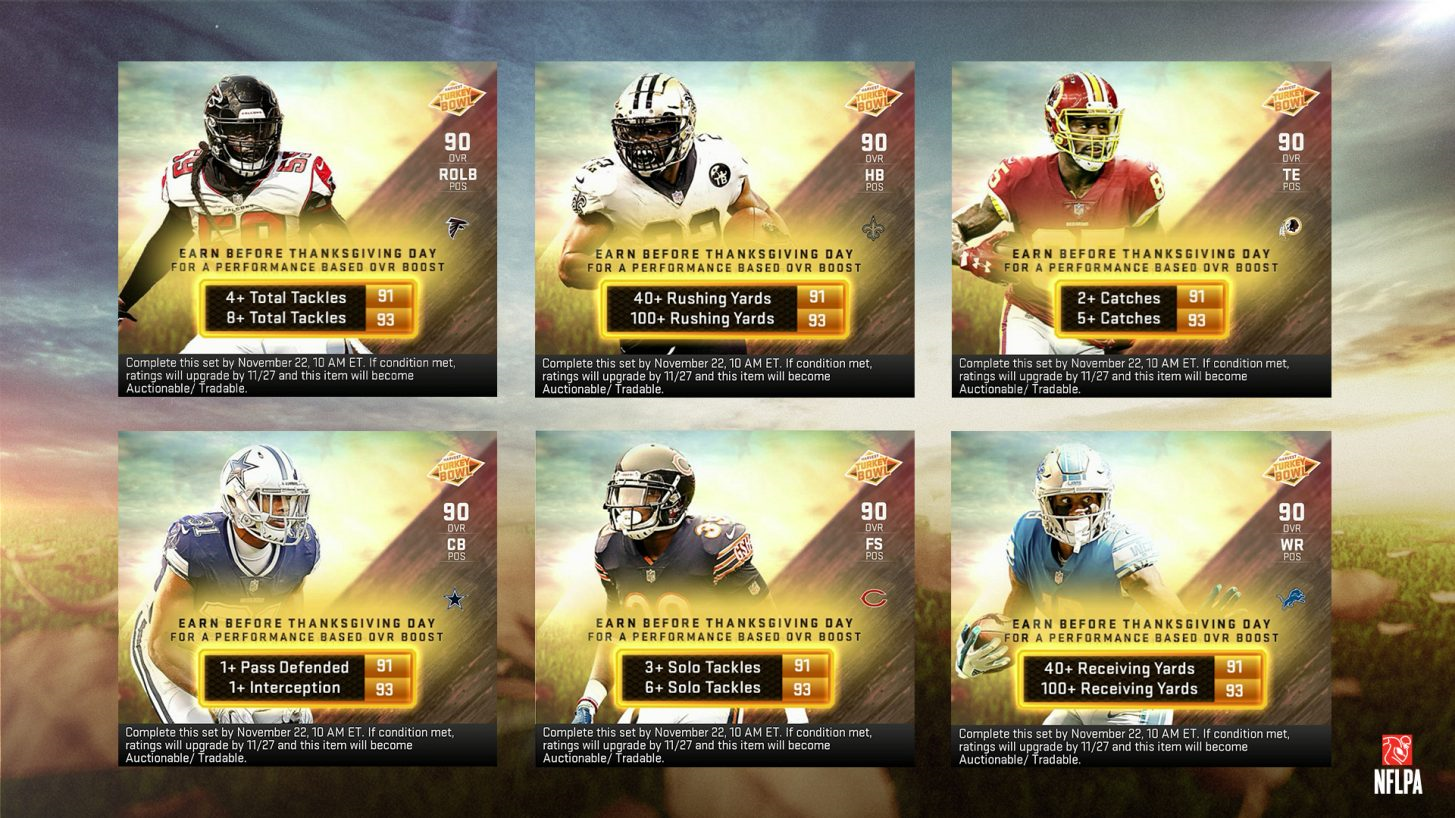 There are six Turkey Trotters, one from each of the six NFL teams playing on Thanksgiving Day. The ratings for that player will adjust based on their NFL performance. Keep an eye on these items to see how they’ll adjust on Thanksgiving.

There’s this and plenty more dropping in Harvest: Turkey Bowl. But the crème de la crème of this season’s Harvest crop are the Turkey Bowl MVPs. 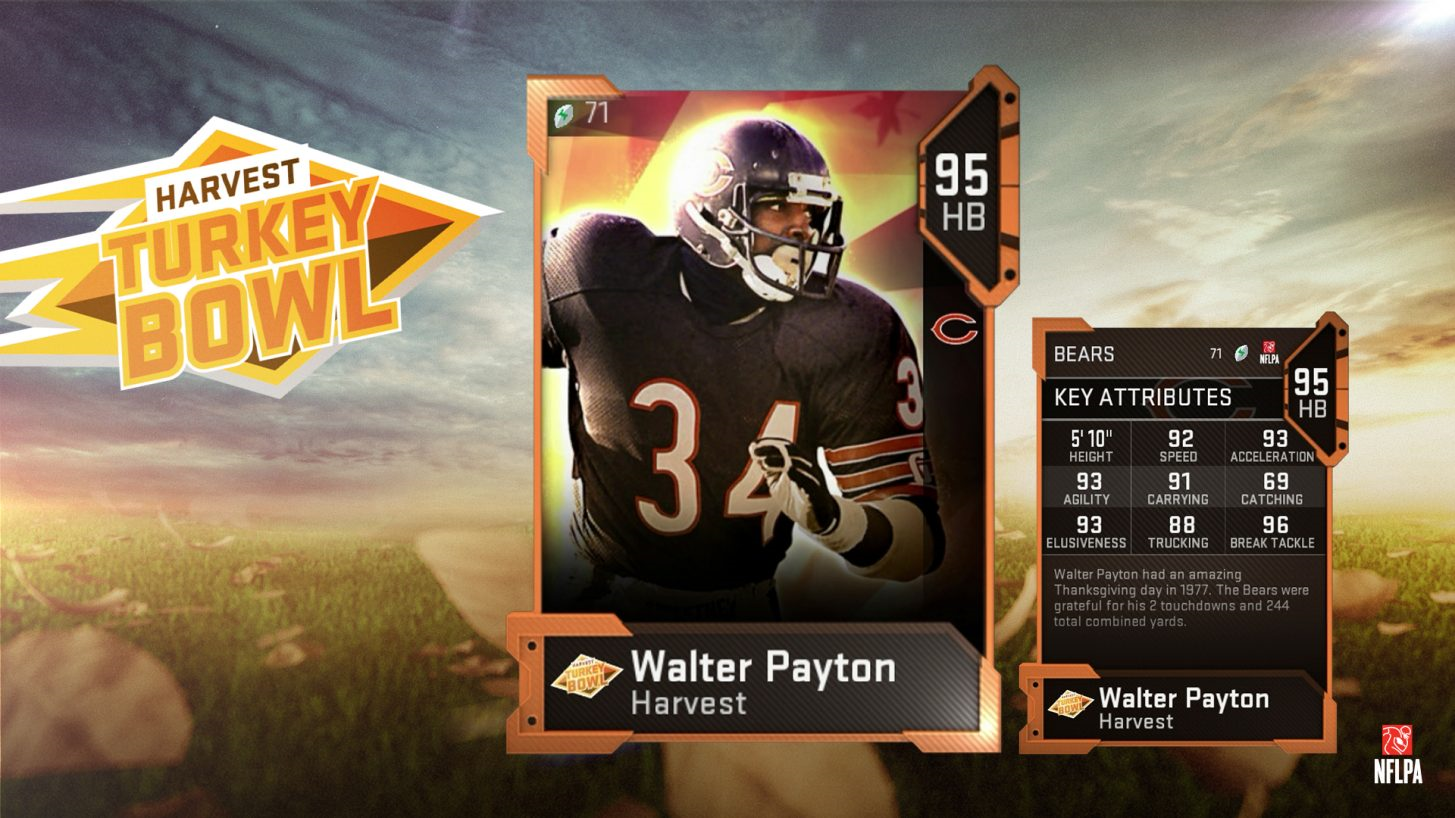 Walter Payton is one of the most gifted athletes the NFL has ever seen. Payton was a dangerous combination of speed, power, and elusiveness that simply no other running back has ever matched.

Later outdone by Emmitt Smith, Payton currently stands as the NFL’s second all-time leading rusher with 16,726 rushing yards, and is fourth in all-time touchdowns with 110. Payton’s greatness continues to inspire NFL talent to this day.

He enters Ultimate Team with the same game-changing talent. His ratings combination makes him extremely difficult to solo tackle. His 92 Speed, 88 Trucking, and 96 Break Tackle provides touchdown potential on any given play. Just like the man himself, this Turkey Bowl MVP is the picture of greatness. 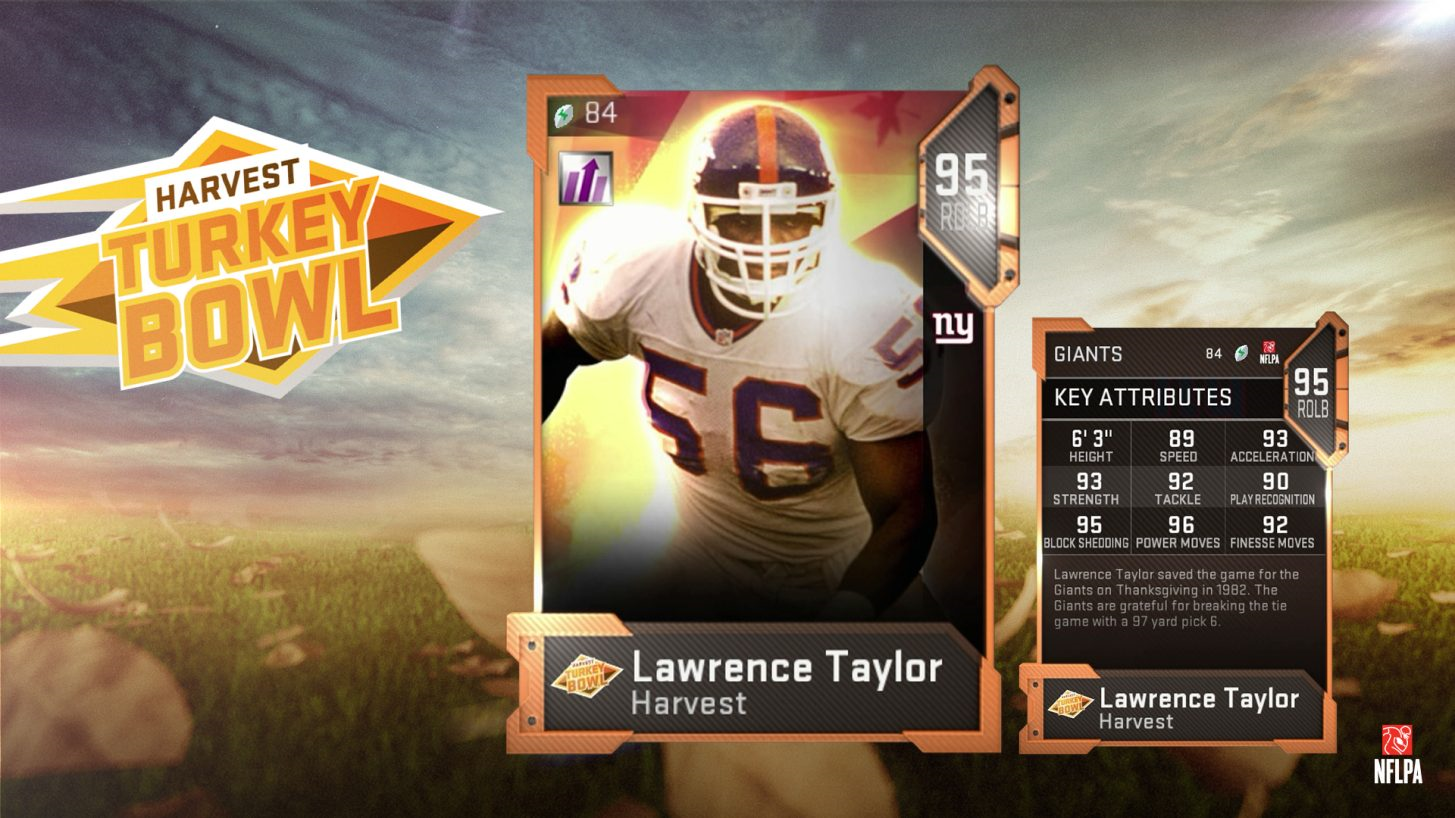 But if it’s defensive help you’re looking for, the Defensive MVP Harvest brings has your back. Lawrence Taylor is an unstoppable juggernaut of a linebacker, and rendered offensive blocking schemes obsolete.

Assigning a running back to block L.T. was almost a guaranteed hit on your signal caller. Taylor’s ratings in Harvest can single-handedly stop offenses in their tracks. If your opponent’s O-line is mediocre, Taylor is going to break through almost every play. His 92 Speed, 93 Strength, and an outstanding 96 Power Moves allows this Harvest item to level anything in his path. 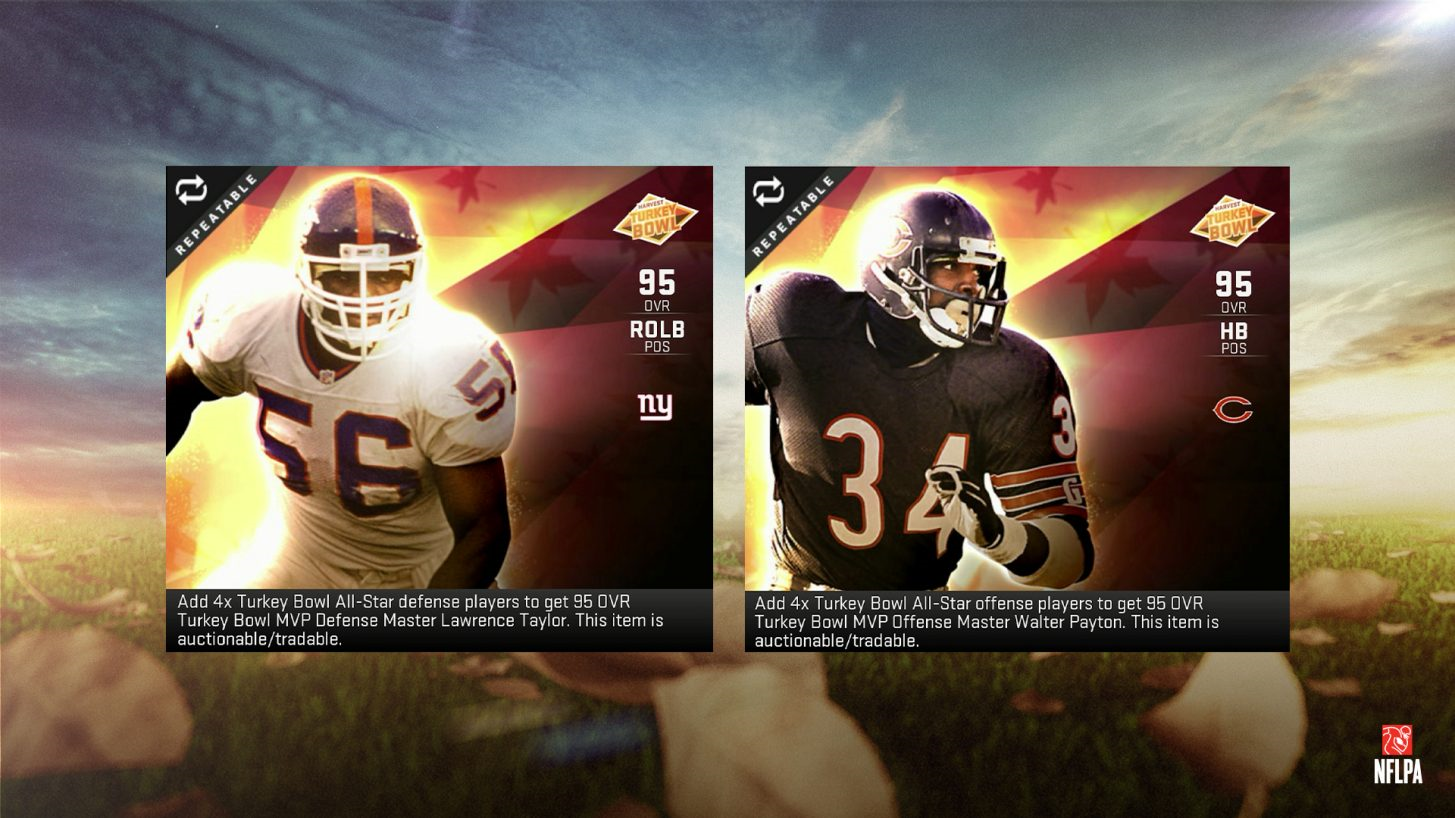 Harvest: Turkey Bowl is offering this and much more. Make sure to go into Madden Ultimate team and improve your squad with some of these superstars. Here’s a quick look at some what else you can expect from Harvest. 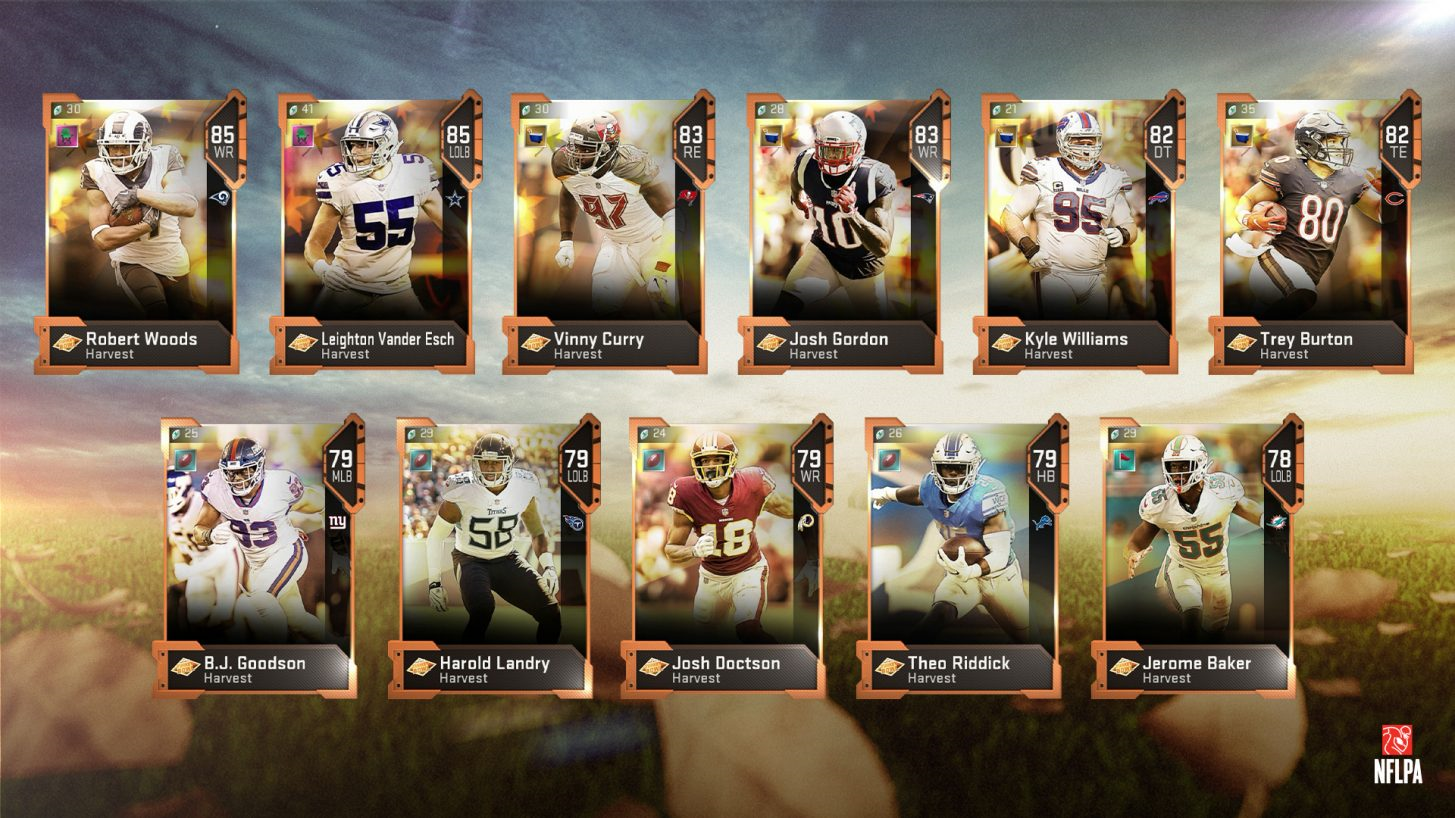 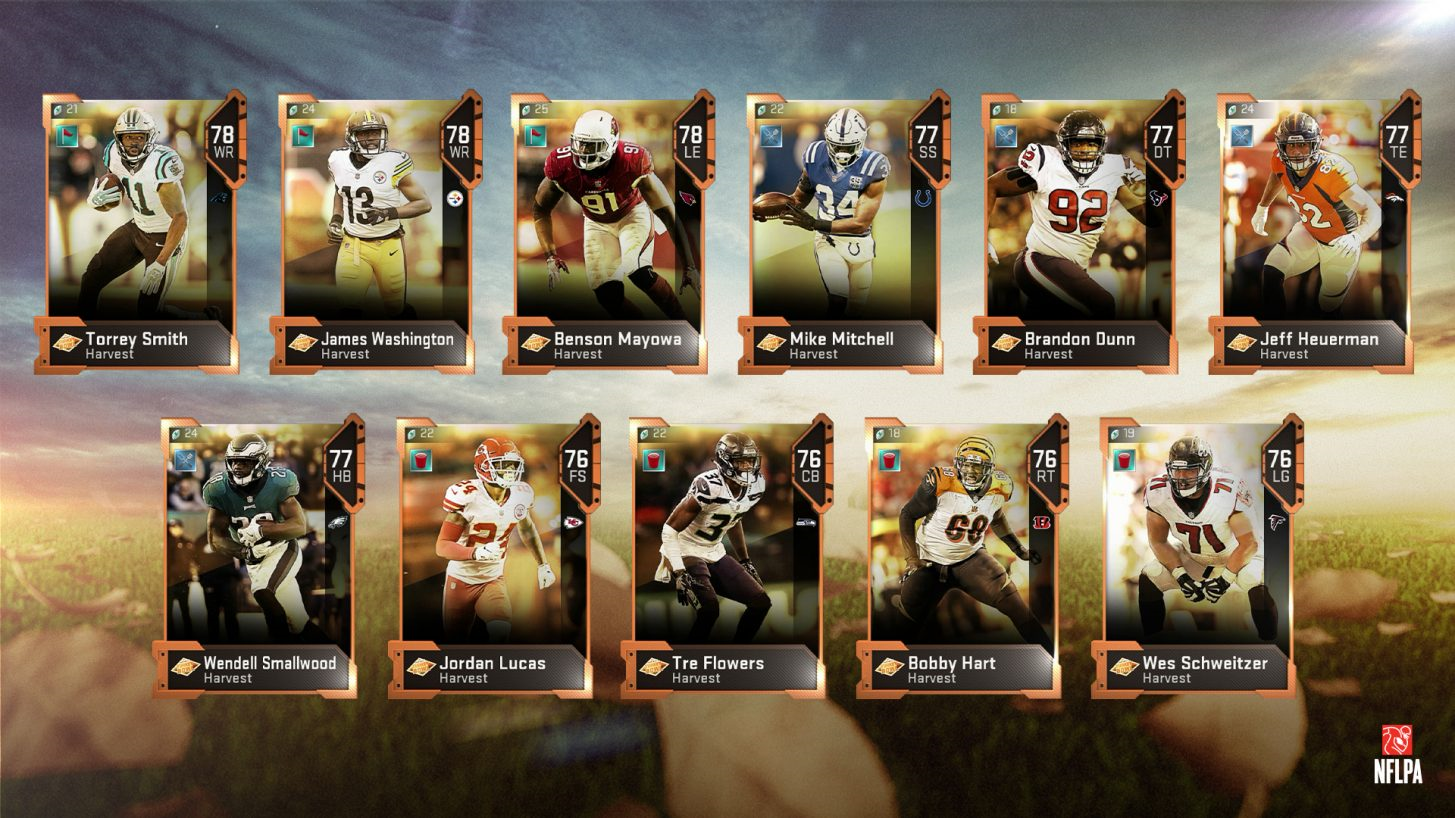 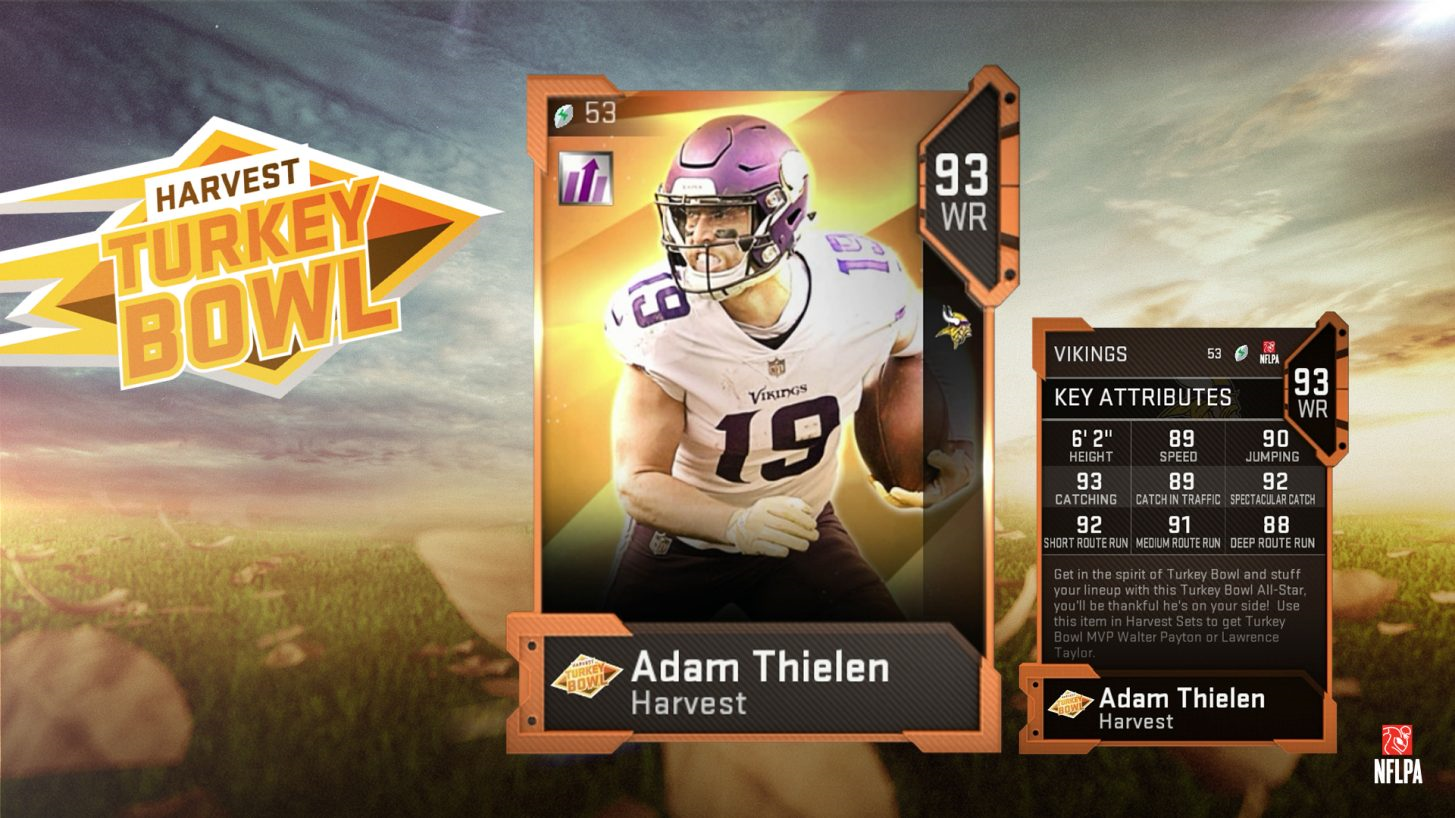 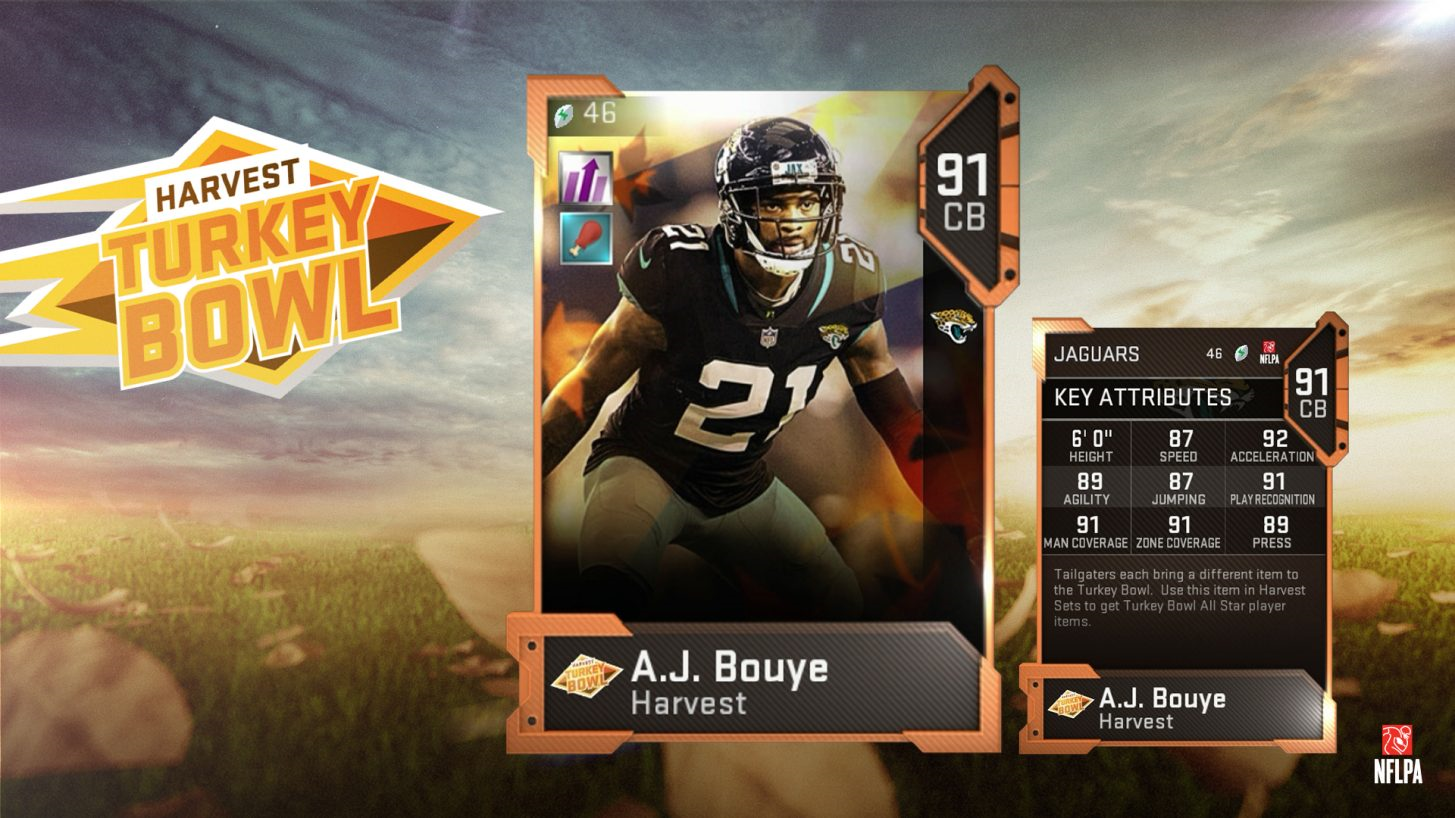 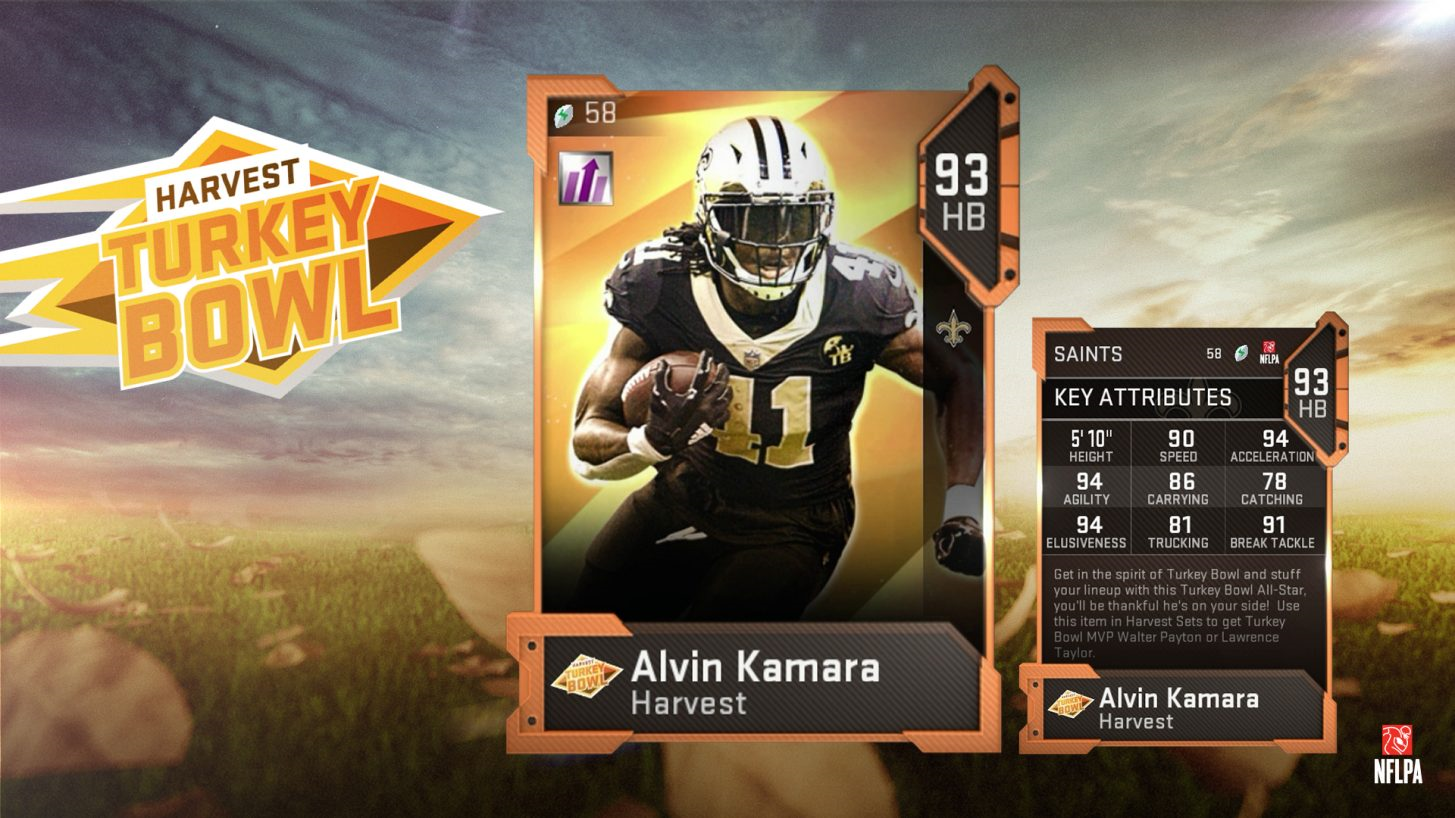 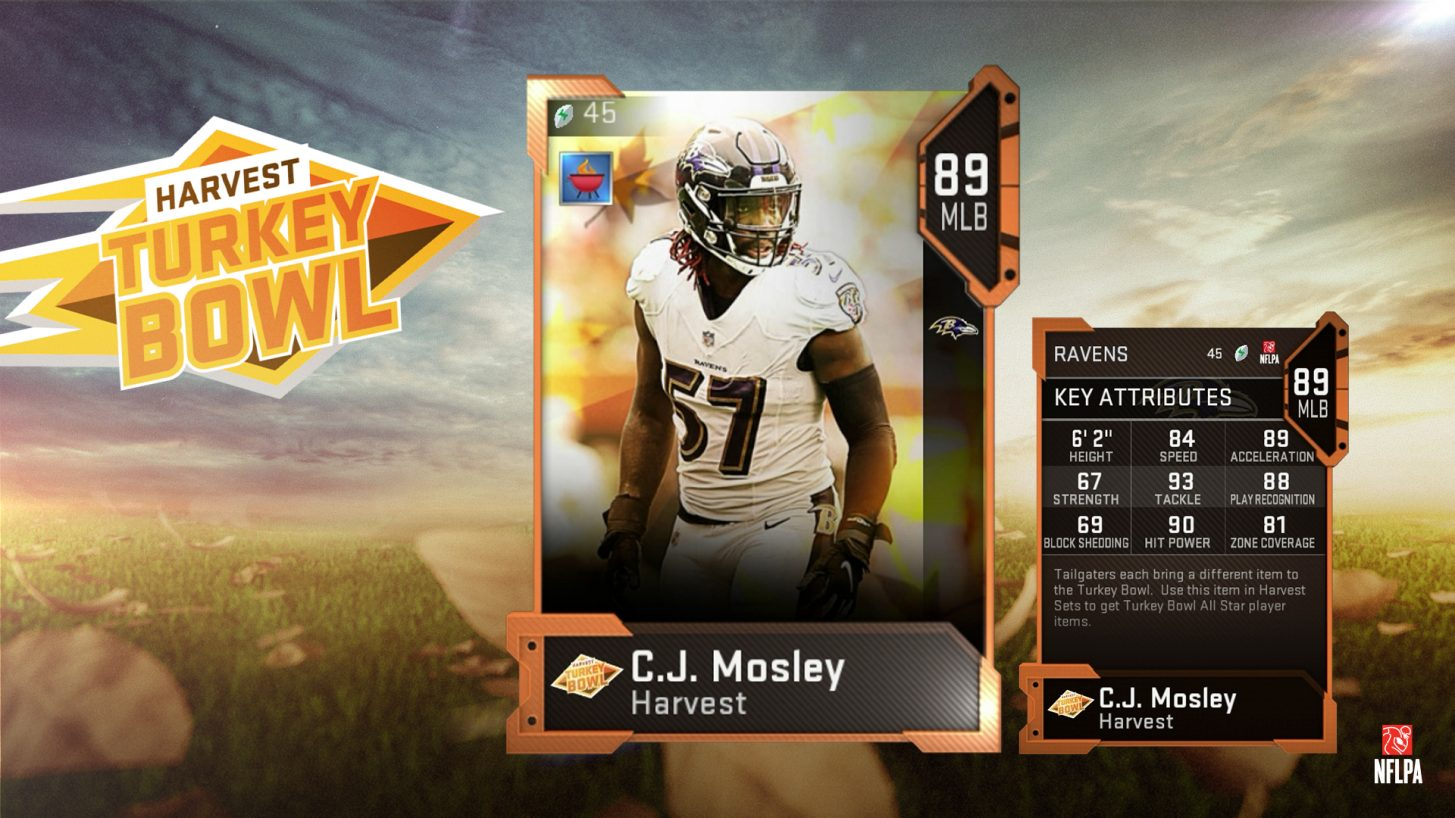 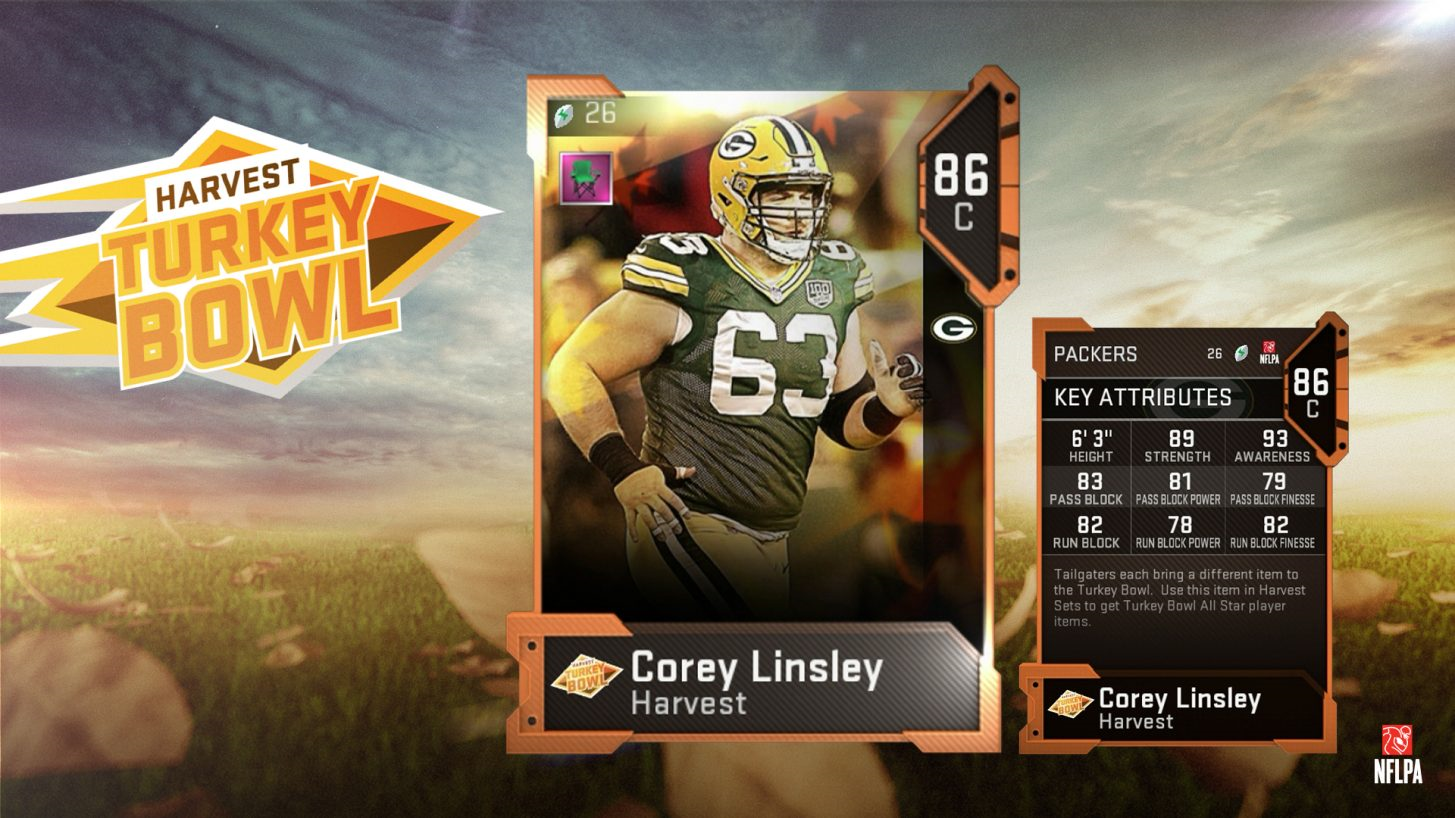