Today we’re excited to share with you our final set of Franchise updates arriving tomorrow in Madden NFL 21. We’re going to start with League History and then take a deep dive into the Trade Logic and Player Value Improvements.

Also, be sure to check out our previous Franchise updates Here and Here

Revisit the history of your franchise through our new running log of key award winners, conference, and Super Bowl champions on a yearly basis.

These records will be located in a single hub with a year filter to see the champions and award winners from previous seasons.

DEV NOTE: For existing franchises, this will ONLY have data for the current season and beyond. If you are in year four of your Franchise, the previous years will not have data. For new franchises (made after this update) every year of your league will be tracked. We wanted to make sure to get this feature in as we have plans to build on it in the future.

In many cases, we took top reported community issues with trade value as direct inspiration to design and implement ways to address those concerns in a way that gives tangible changes for Madden NFL 21 and serves as a foundational piece for our tuning in the future. We can and will be better adapting our core systems to better reflect a more realistic player movement experience in the future.

When it comes to building your roster, our new tuning is also a shift towards a “reciprocation” approach for highly valued players closer to what we’ve seen based on changing perceptions of “realistic” trades over the years with major names changing teams more frequently.

At the core, this means that for users trading FOR a star, it will cost a package of either high value players, picks, or both...and for the other way, trading AWAY a player.

The price to obtain a star or high overall (OVR) player should, can, and in most cases will be steep but rooted against more authentic trade packages. We also wanted to provide more direct power to users who are willing to move high-value players from their own roster to get more in return that wasn’t previously possible.

Our goal is to have things still make sense in the logic. Even if a trade is offered or accepted that is inherently not in the best interest of the team to make, while making it cost-prohibitive at times to do… a difficult balance without directly blocking users from acquiring who they want.

Here’s an overview on some of the more impactful areas found and addressed in more detail:

Aligned the trade system to always use a player’s best OVR rather than using a team’s OVR.

Fixed issue where high OVR/Dev players inexplicably did not have value due to player archetype differences (in situations where a team valued a Receiving Back but had a Power Back, the Power Back would previously crater in value for no reason otherwise. Value is now more consistent as a result.

Added logic for CPU teams to be able to recognize context around when a player is actually an upgrade when acquiring a player that is not a starter on their current team but would be for the new team.

Allows CPU teams to better recognize when a lower quality caliber player is circumstantially starting. Rather than a 73 OVR getting the same base value for being CB1 as a player like Stephon Gilmore would.

Addressed issues where players would be evaluated at the incorrect depth chart position on the acquiring team. This caused inconsistencies in player values for CPU teams acquiring players.

Addressed trading for same-position value issues. When a user or CPU team trades a starter for another player at the same position who would start, we were not valuing the player as a starter for their new team, which caused players to be valued less than they should be.

Additional updates were also made to:

Base values of every position at each depth chart slot for all 32 NFL teams including Franchise-specific Schemes to address isolated value issues and authenticity improvements.

Allow both teams to access the premium value associated to trades, which gives each team a better picture of the player’s actual value.

Addressed multiple instances of issues where lower OVR players would be overvalued due to team need at a position.

Added check to value any OL with a Superstar Dev Trait at the equivalent of a Superstar X-Factor value.

Made Dev Trait a full factor in the player’s value calculation, rather than a modifier for a boost.

This logic also impacts what positions teams look to trim roster cuts on in Preseason. New values are aligned and intended to leave teams with a more appropriate number of players at each position per authentic expectations.

We have seen cases where this can resolve issues where 4-3 CPU defenses would be left with only three DTs on the roster, most teams carry four DTs in real life, but exact results will vary on team quality during cuts and remain dynamic.

Previously, the second and third draft pick in an offer would have slightly decremented values. We didn’t feel this was authentic, so we removed it.

Impacts both pick for pick trades as well as picks for players, or any mixture of the two.

Teams will have more nuanced perspectives of valuing players and draft picks from their own and opponents.

This creates a situational concept in Franchise that we see all the time in the NFL. Just because a team is more open with trading a draft pick in a championship contention window doesn’t mean that the team should or does not still value draft picks at all as a core philosophy.

Retuned value increase modifiers for players in the first year of their contracts and players who are rookies.

Age Value tuning - Every player position received a new customized age value curve that keeps player value authentically updated as players get older in Franchise. As players age, the more the age impacts their value on the market.

This allows us to replicate the impact of trade value declining for aging veteran players and provide CPU teams a way to “devalue” these players at scale. Each position is tuned differently.

DEV NOTE: This is where we get to subjective water-cooler trade talks like “You see what that team just offered for <PLAYER>? Seemed like a steal. What would you give up?”

“I’d probably give up a 2nd round pick.”

“Yeah, but they could retire in a year. He’s worth a 1st round pick to his team, easily, but for anyone getting them, they’re not getting him for very long.”

For example, an 86 OVR QB is a franchise-level talent. We wanted to make sure that trading away or for a player at that level is recognized for being a more valuable and rare commodity than possibly a 90-93 at other positions.

All positions have a high age value percentage for players in their early twenties, but just like in real life, QBs are generally more valuable than players of equivalent skill at other positions at any age!

Combined with the base value tuning mentioned earlier, this makes young high-OVR starting QBs exceptionally valuable and a significant investment of draft capital to acquire a top player based on OVR, age, Development Trait, and other factors.

Be sure to check out this special message from Seann Graddy, the Executive Producer of Madden NFL to recap the year and talk about the future of Franchise! 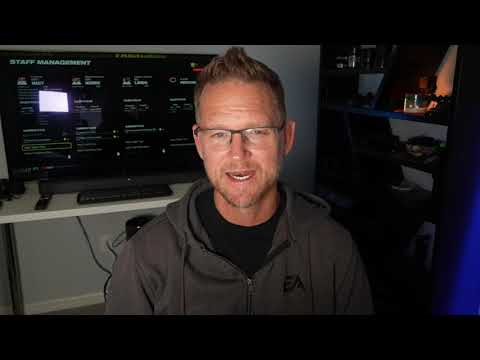