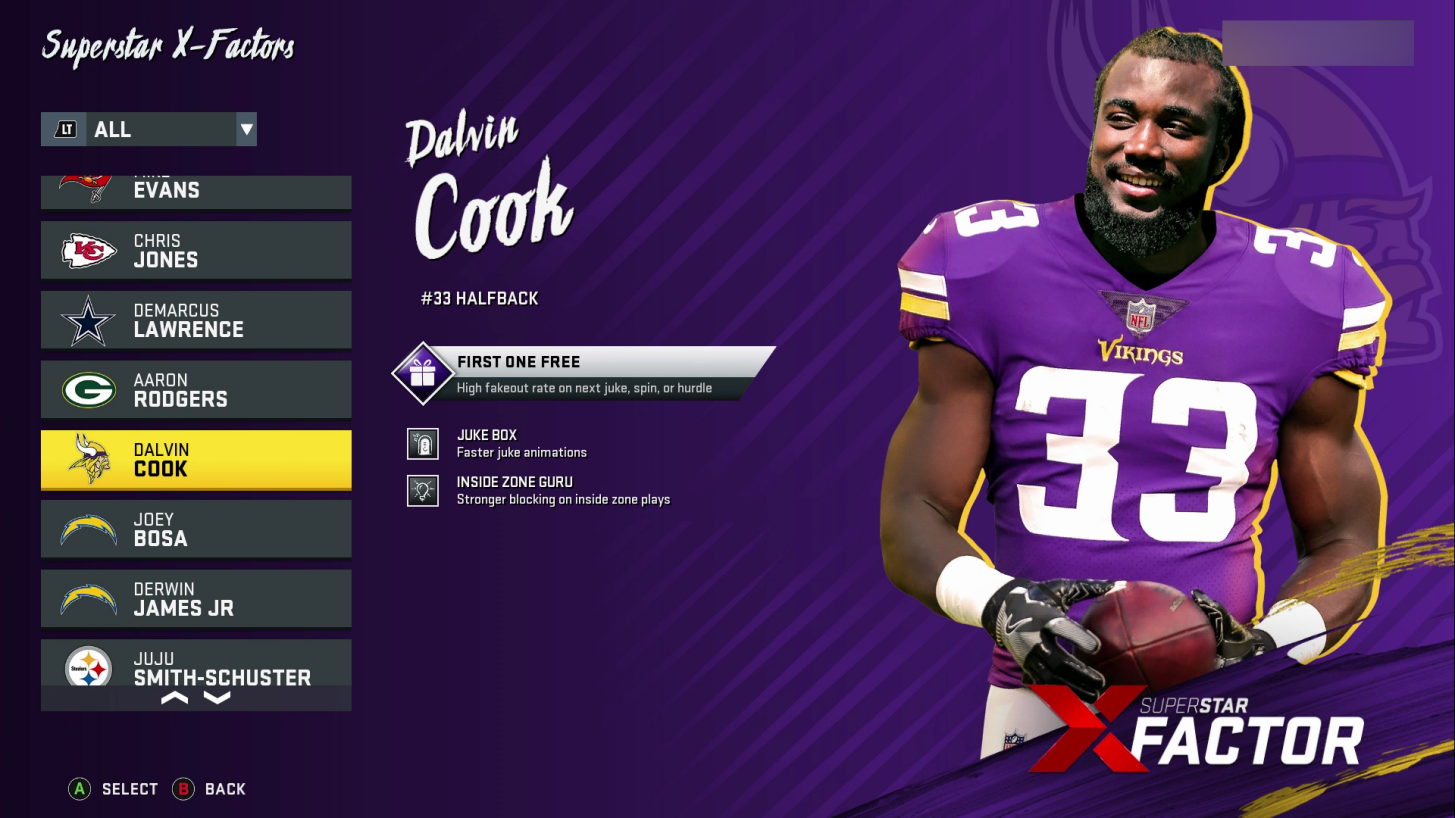 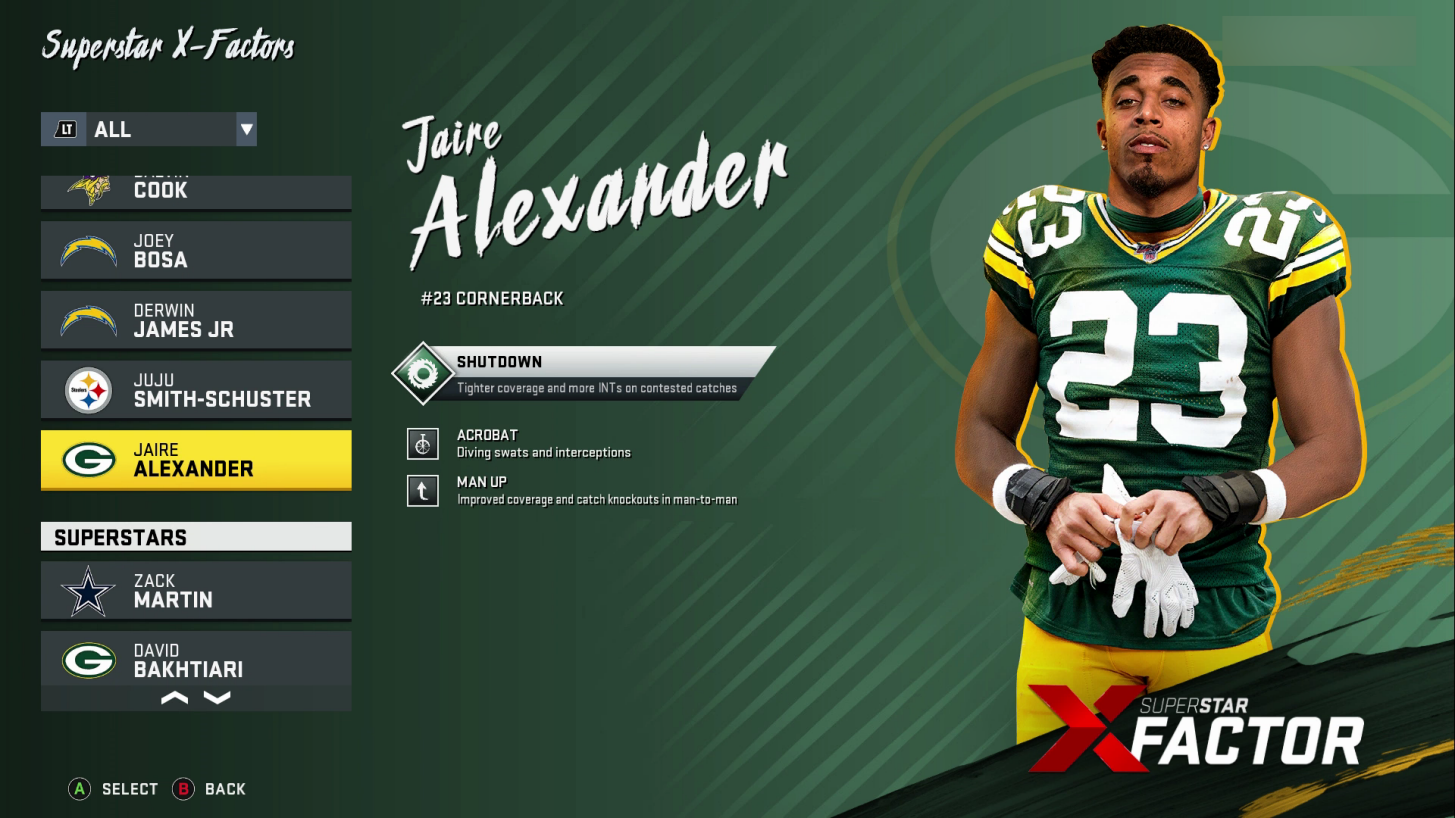 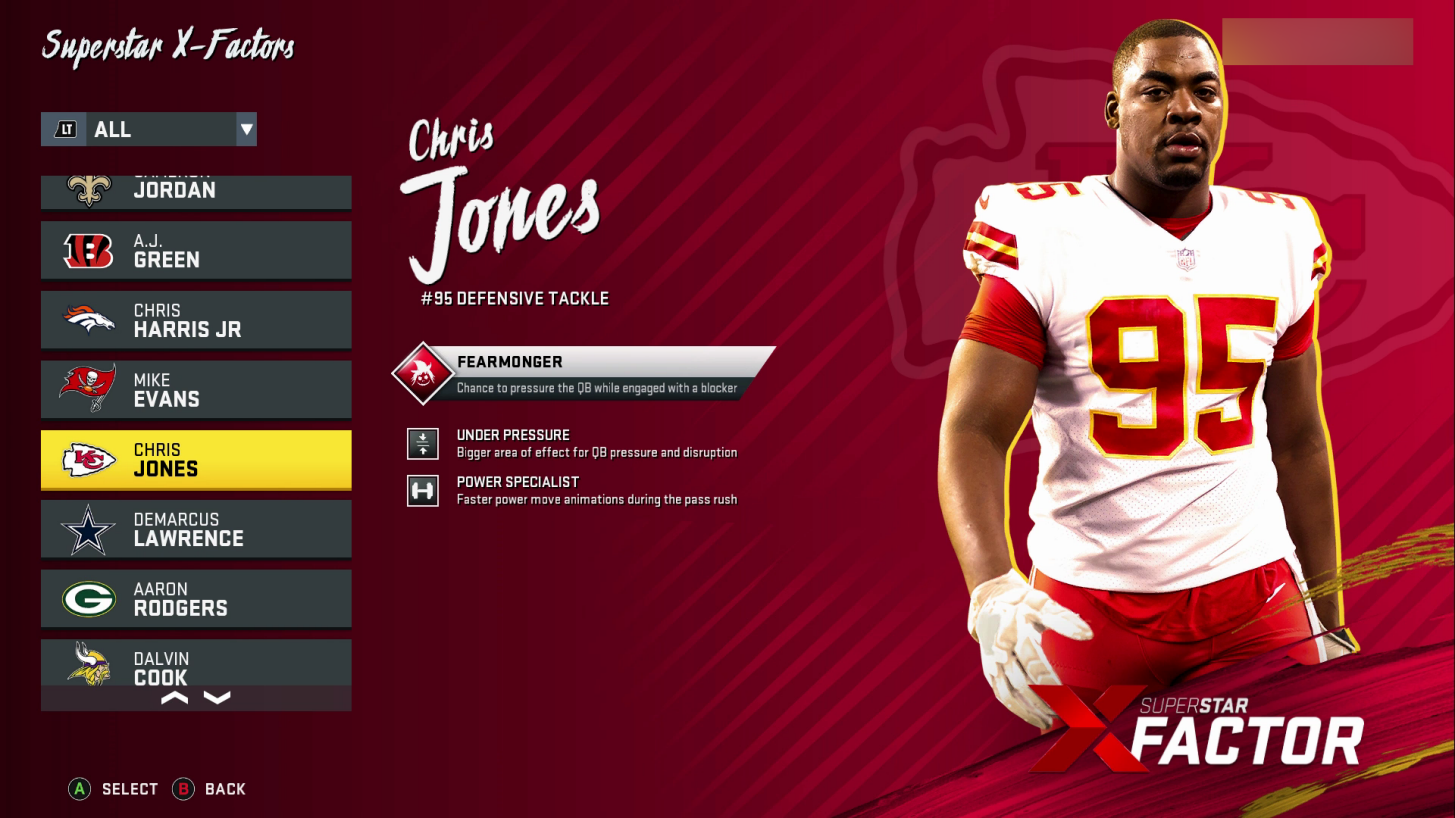 DEV NOTE: Superstar X-Factor reshuffling is part of our ongoing continuous development plan to keep the rosters and players as up-to-date as possible with the events of the NFL season. These updates will apply to Front End rosters for Online head-to-head games.

Protective Custody - Ball carriers with this ability are immune to fumbling when in the zone.

Ultimate Team Requirements: Available as a Zone ability for running backs only.

Mossed - Inspired by Ultimate Team Legend WR Randy Moss, when players with this ability enter the zone, they will win contested catches regardless of coverage on passes of 50 yards or more (but does fall back to ratings formula when countered bypass coverage abilities).

Out My Way - Defensive ability that always wins vs. impact block attempts vs. WR’s, TE’s and RB’s.

Inside Stuff - Defensive ability allowing quick blocksheds against 1-on-1 run blocks on inside running plays.

No Outsiders - Defensive ability allowing quick blocksheds against 1-on-1 run blocks on outside running plays.

Tank - Inspired by Ultimate Team Legend TE Rob Gronkowski, ball carriers with this ability break all hit-stick tackles (but does fall back to ratings formula when countered by ‘Enforcer’); this ability is only available for TE’s inside of Ultimate Team.

Fixed an issue causing all players from a downloaded Draft Class file to appear as ‘Early First Rounder’ in the ‘Scout College Players’ tile.

DEV NOTE: Players will only see this fix when importing a new file or re-importing the same draft class file. The fix activates when the import is processed, so existing leagues will have to make sure to import before it will take effect.

Fixed an issue causing leagues’ injury records to be deleted when toggling off the Pre-Existing Injury league setting during the season; this option is now only available during league creation.

Fixed an issue with the menu when creating a new Cloud Franchise league, using Real-Life Rosters, and navigating the Choose Week menu.

Fixed an issue in multi-user leagues where menus would persist when another user advanced the week.

Added a warning for coaches about save-settings when switching between Offense and Defense in the Auto-Subs menu.

Updated players that are “Last Chance" (players that will enter Free Agency the following week if not re-signed) to now be listed as ‘0’ years remaining in the Team Salaries menu.

Fixed an issue causing the ‘retire’ text to say ‘Undrafted’ when the Face of the Franchise: QB1 user was cut from the team.

DEV NOTE: We have re-enabled the functionality that causes ball carriers to stumble when running into traffic in specific situations. We have isolated stumbling to situations where they are necessary but will continue to monitor and take feedback around more situations that may require ball carrier stumbles.

Tuning to reduce the frequency of ‘auto-broken’ tackles vs. AI-controlled and user-controlled defenders when using conservative tackle on Competitive game style.

DEV NOTE: This tuning will significantly decrease the frequency of ratings-based broken tackles on Competitive game style, with an even lower chance of a broken if the conservative tackle is being performed by a user-controlled defender. Conservative tackles can be used via the mechanic and/or by running into the ball carrier to initiate a tackle interaction.

Tuning to prevent the ball carrier from retaining top speed while using the cover-ball mechanic on Competitive game style.

Added functionality to receiver Zone abilities ‘Rac ’em Up,’ ‘Double Me,’ and ‘Max Security’ so that they will beat the press vs. man coverage when in the zone.

Tuning to slightly increase block-shed speed for the ‘Run Stuffer’ Zone ability when in the zone.

Tuning to reduce situations where AI-controlled players are allowed to cause fumbles on Competitive game style (excluding vs. scrambling QB’s)

This tuning change will significantly decrease the chances of AI-defenders forcing fumbles on competitive game style, but does NOT apply when tackling scrambling QB’s.

Fixed an issue that prevented the offense from snapping the ball with a player in motion while the defense was resetting the play.

Fixed an issue allowing inaccurate sky kickoffs near the sideline to be frequently recovered by the kicking team.

DEV NOTE: This has come to be known in the community as the ‘Scum Kick.' This fix will force kickoffs that are very inaccurate to sail out of bounds.

Fixed an issue sometimes causing a player to freeze on the ground after getting tackled by the feet.

Fixed an issue allowing an AI-controlled defender to make an interception vs. the ‘Gambler’ ability in a specific multi-player catch situation.

Fixed an issue sometimes causing the kickoff animation to misalign during an onside-kick attempt by an AI-controlled team.

Fixed an issue causing a missed handoff when using an audible to End Around plays.

Tuning to improve pass leading down on slant routes.

Added functionality for players to get currency refunds for Superstar Abilities, Zone Abilities and Chemistry.

DEV NOTE: All Superstar Abilities, Zone Abilities, and Chemistry will be eligible for a 90% refund at all times. Players can choose to manually go and refund individual abilities/chemistries or the refund will happen automatically when downgrading an item. After refunding, the ability/chemistry will need to be purchased again should you choose to re-equip it.

Added functionality to prevent points from improperly being awarded in specific House Rules when a penalty is committed.

Updates to MUT Draft Coach Round.

An additional Coach Round has been added at the end of the draft, with the option to choose a new playbook.

Choose 1 of 3 playbooks in the first Coach Round, then have the option to choose a new playbook from 3.

NEW choices in final coach round, for a total of 6 playbook options.

Increases chance of getting a particular playbook from 9.38% to 18.75%

Snoop Dogg added as an Icon to the Superstar: KO Draft Pool.

DEV NOTE: Snoop Dogg joins the Superstar KO fray as a Legendary Wide Receiver. He can’t wait to prove himself on the field, but it begs the question: What happened to Coach Snoop?

Additional Presentation has been added to the Superstar: KO Stadium.