Today we’re focusing on the updates coming to Face of the Franchise and Classic Franchise in Madden NFL 21.

In the Face of the Franchise section, you will see the chapters of your career detailed out starting in high school. We are also sharing the storylines you can experience in your NFL career.

Take note of these storylines as they can happen in different years throughout your NFL career which gives Face of the Franchise even more depth. We’re also introducing you to the cast of characters you’ll meet throughout your career.

For Classic Franchise, we’ve highlighted the updates coming to the mode for Madden NFL 21 on day one.

Let’s kick it off with Face of the Franchise!

SPOILER WARNING: Story spoilers ahead for Face of the Franchise!

Face of the Franchise: Rise to Fame

Create yourself as a player and jump into Face of the Franchise where you will shape your career from High School all the way to the Hall of Fame.

High School – it’s where most start their journey towards adulthood, but for you, you’re also about to embark on your journey into football stardom! Step into the halls where it all begins as you customize your high school experience by choosing your school name, city and even mascot.

From there your story begins to unfold as you’re plucked from relative obscurity to provide depth behind the school’s resident star QB Tommy Matthews. Your backup gig is shortly lived however as Tommy has been harboring a secret about his health – one that he shares only with you, leaving you with a crisis of conscious.

Do you keep his secret and risk his health, or do you betray his trust and shed light on his potentially serious condition?

Your decision will define your relationship together throughout your story as you and Tommy at times teeter between best friends and bitter rivals, but through it all you can you find a way to join forces and lead your team to the promised land – a State Championship?! 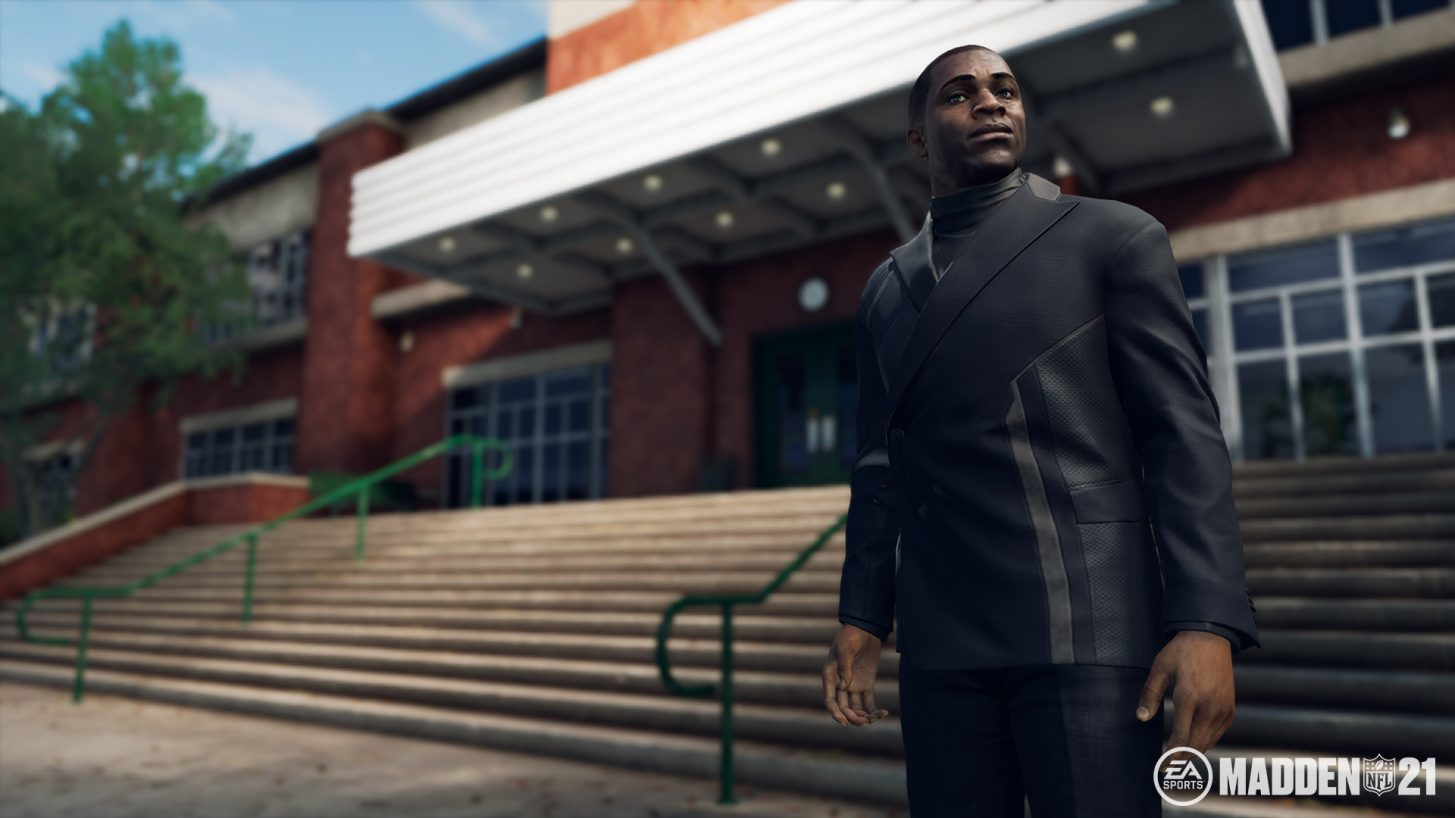 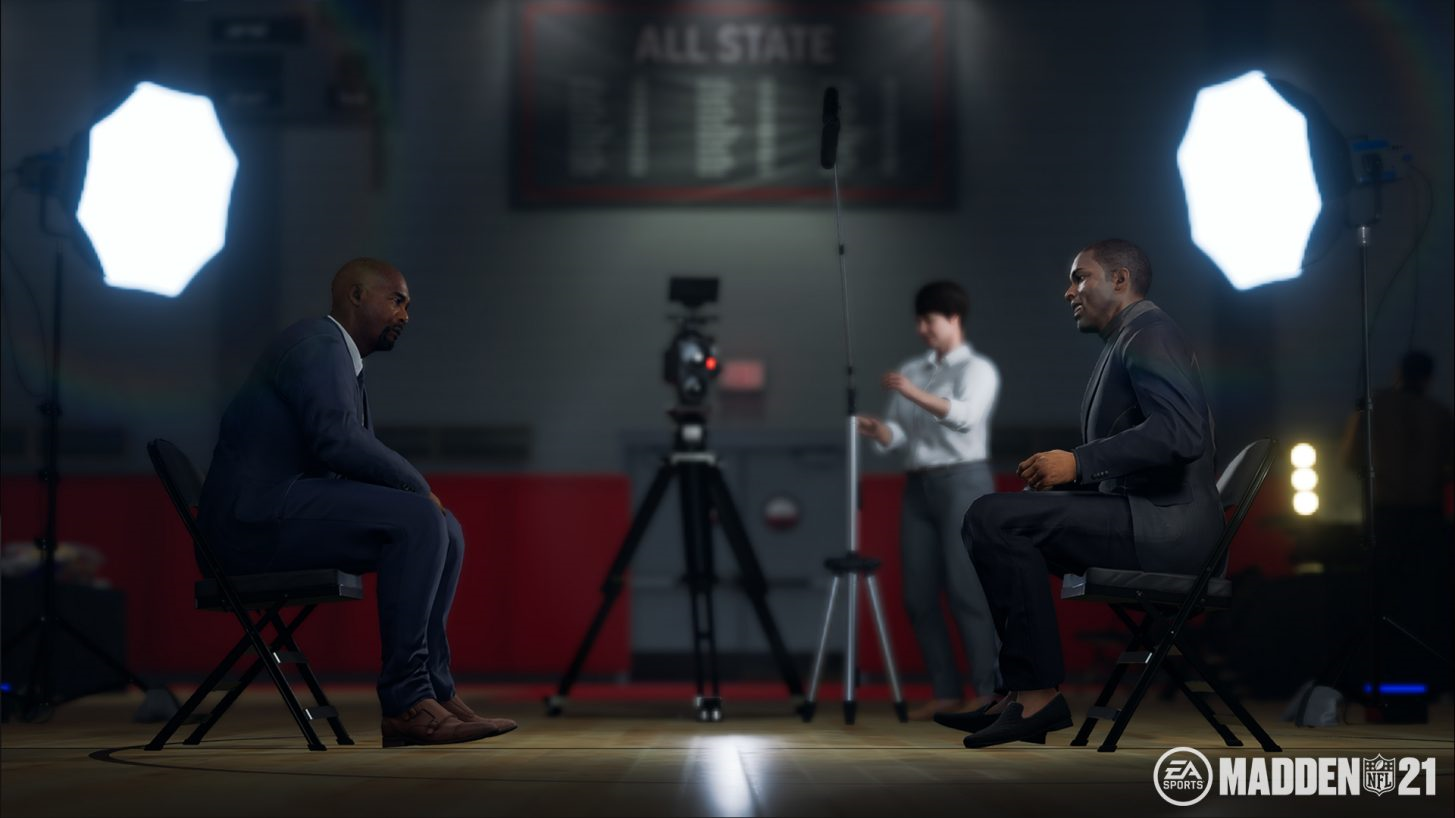 Your story doesn’t end there though as you’re thrust center stage on National Signing Day as ten FBS schools vie for your talents. What starts off as a normal Signing Day ends with a dramatic twist after you don the hat of the school you’ve chosen to attend.

Once you set foot on campus the stakes get even higher as you not only have to deftly navigate a Quarterback controversy right out of the gate, but also have to figure out how to appease your domineering, old school approach, newly minted Head Coach Red O’Brien – all while attempting to build your draft stock through two challenging seasons of college football AND win an College Football Playoff Championship (or two) along the way.

As if that weren’t enough, you’re thrown out of your comfort zone and into disarray when Coach O’Brien delivers you an ultimatum – either switch positions to Running Back or Wide Receiver, or pack your bags and take your chances in the NFL Draft!

Since 1982 the NFL Combine has been hallowed ground for the NFL’s next generation of talent to showcase their skills for prospective teams. Now it’s your turn as you tread those very same grounds and put your abilities to the test amongst your fellow elite up and coming talent.

But your skills on the field won’t be the only thing scouts will be watching as you’re forced to step up to the mic at a pivotal press conference and either let fate decide where you go in the draft or help influence which team selects you.

This life changing experience continues when you encounter a chance meeting with legendary NFL commentator Rich Eisen as he helps prepare you for the most crucial event of the combine, the event that can make or break your career – the illustrious 40-yard dash! 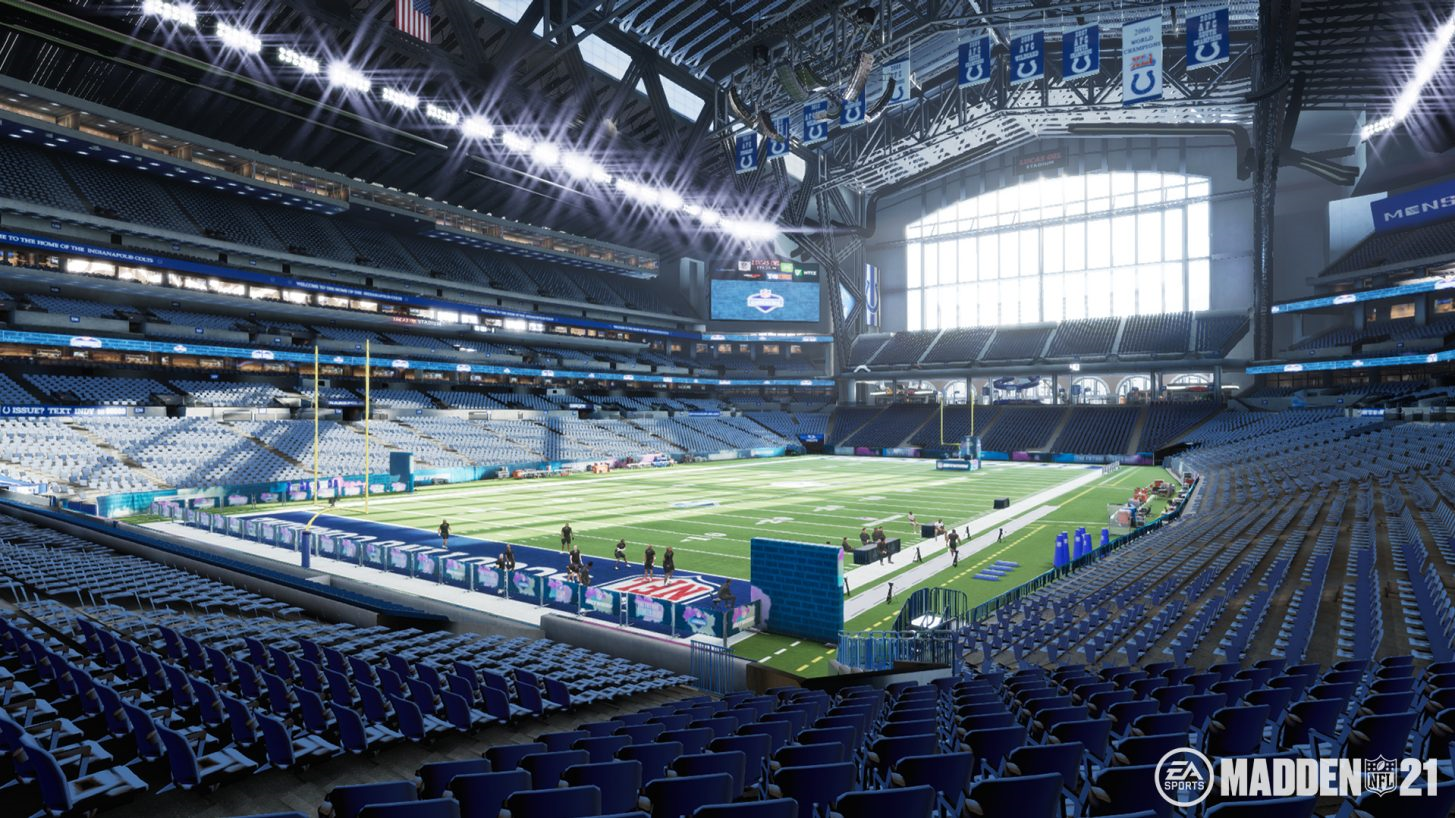 Your career will have numerous twists and turns as you navigate the many obstacles of the NFL where you will be able to live out NFL storylines ripped from the headlines.

You’ve entered the NFL as one of the most highly touted prospects in your draft class, and that means an entire organization is putting their Super Bowl hopes and dreams on your shoulders. All-time greats were able to deliver on those championship hopes. Now it’s time to prove that you’re cut from the same cloth as those legends.

After being selected in the NFL Draft by a team with a solidified starter at your position, it’s clear that even if your time isn’t now, it will come soon enough. How will you win over the veterans in the locker room in the meantime? And if the time comes that you’re thrust into action sooner than expected, will you be able to prove you’re the man for the job, like Russell Wilson did so seamlessly in Seattle?

Following an up and down college career, you were selected in the later rounds of the NFL Draft by a team in search of additional depth at your position.

Even though it’s unlikely that future plans include you, these odds aren’t necessarily insurmountable. Tom Brady made the most of his opportunity to step up back in 2001. Can you make the most of yours and earn yourself a starting job?

Whether it’s team versus team or player versus player, the best rivalries are forever etched in the NFL’s long, illustrious history. Now in the social media era, it’s possible for rivalries to become more contentious and public than ever.

When you and a defensive player on a division rival get into a war of words on social media, it’s only the beginning of the rivalry to come.

Teams with great talent are forced to face great expectations … Super Bowl expectations. Countless teams have fallen short of these expectations, like the 2007 Patriots, the 2001 Rams, and the 1998 Vikings. Can you and your Dream Team come together and complete the dream season, or are there too many obstacles in the way of once-in-a-generation greatness?

The struggle of coming back from a serious injury is too much for many players to overcome. But a handful of legends have been better than ever after making their returns.

In 2012, Adrian Peterson finished first in MVP voting after suffering a career-threatening injury the previous season. After an injury forces you to sit out most of the year, can you regain your form and reestablish yourself as one of the NFL’s best?

After a subpar performance last season, you’re suddenly facing competition for your starting position. But a good old position battle could end up bringing out the best in everyone involved. Can you hold off the in-house opposition and come out even better than before, or is your job in serious jeopardy?

After a long and storied NFL career, it’s just about time to hang up your cleats. That doesn’t mean your final act can’t be your greatest act yet though. Your team has declined and your best days may be behind you, but it’s time to prove you still have what it takes to right the ship one more time and end your career as a champion.

Snoop Dogg: Played by himself.

Rich Eisen: Played by himself. 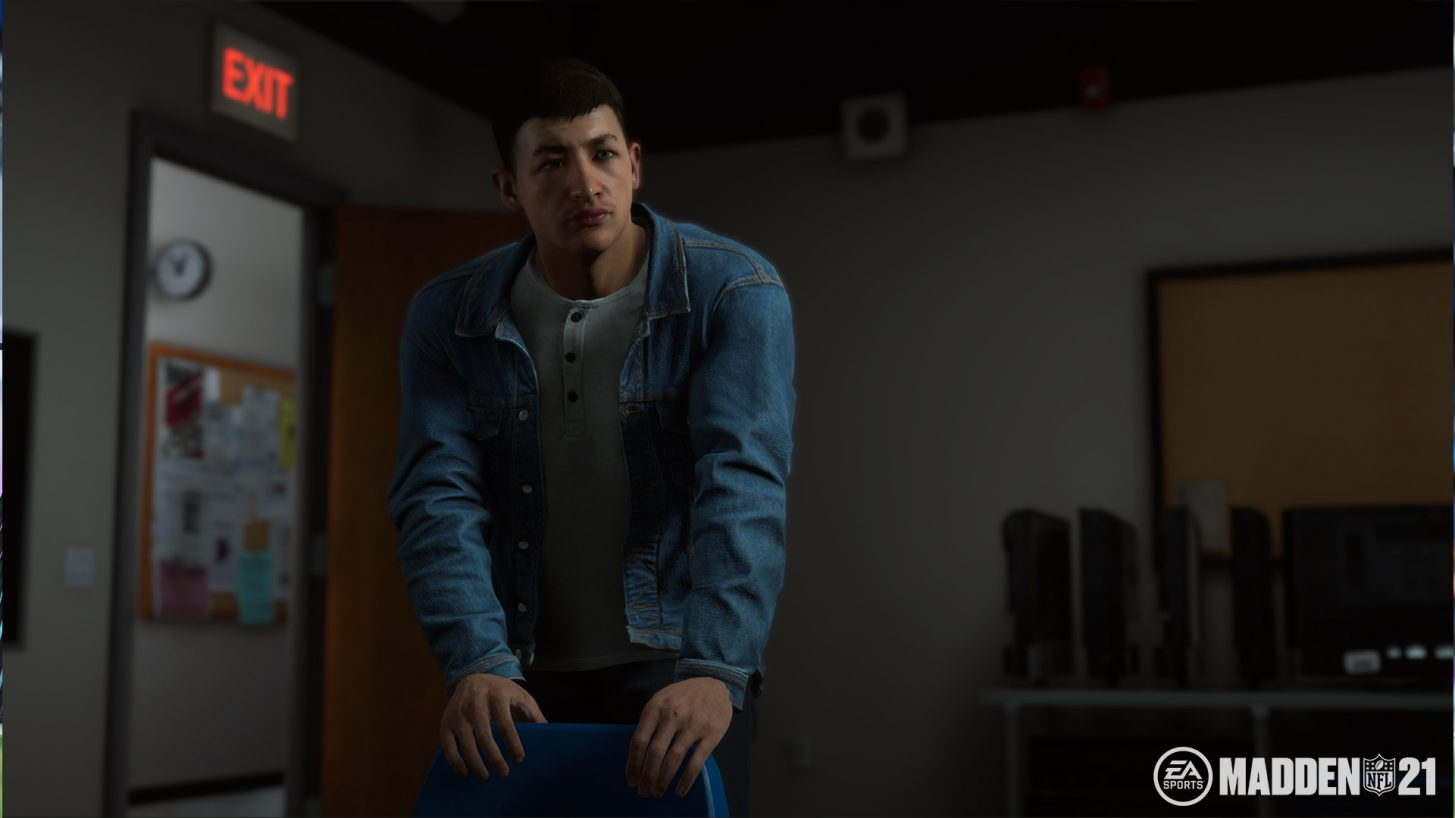 Franchise has an expanded Wild Card Playoff round to match the real-life NFL which now features 3 games for each conference instead of 2.

Retuned every position's available Abilities to better consider in-game effectiveness of the ability and archetype authenticity. Also made the 2nd ability unlock for most positions 85 OVR (was 80 OVR in Madden NFL 20.)

Fixed multiple cases in logic of players considered for a Dev Trait upgrade at the end of the season not checking the correct stat types.

Updates to all team back-end depth chart philosophies so they match the team's scheme.

Fixed issue where defensive playbooks and schemes for our fictional coaches would be misaligned (e.g. 3-4 playbook with a 4-3 scheme.)

Our next Gridiron Notes will be coming Tuesday, July 14th where we will be talking about Playbooks in Madden NFL 21!