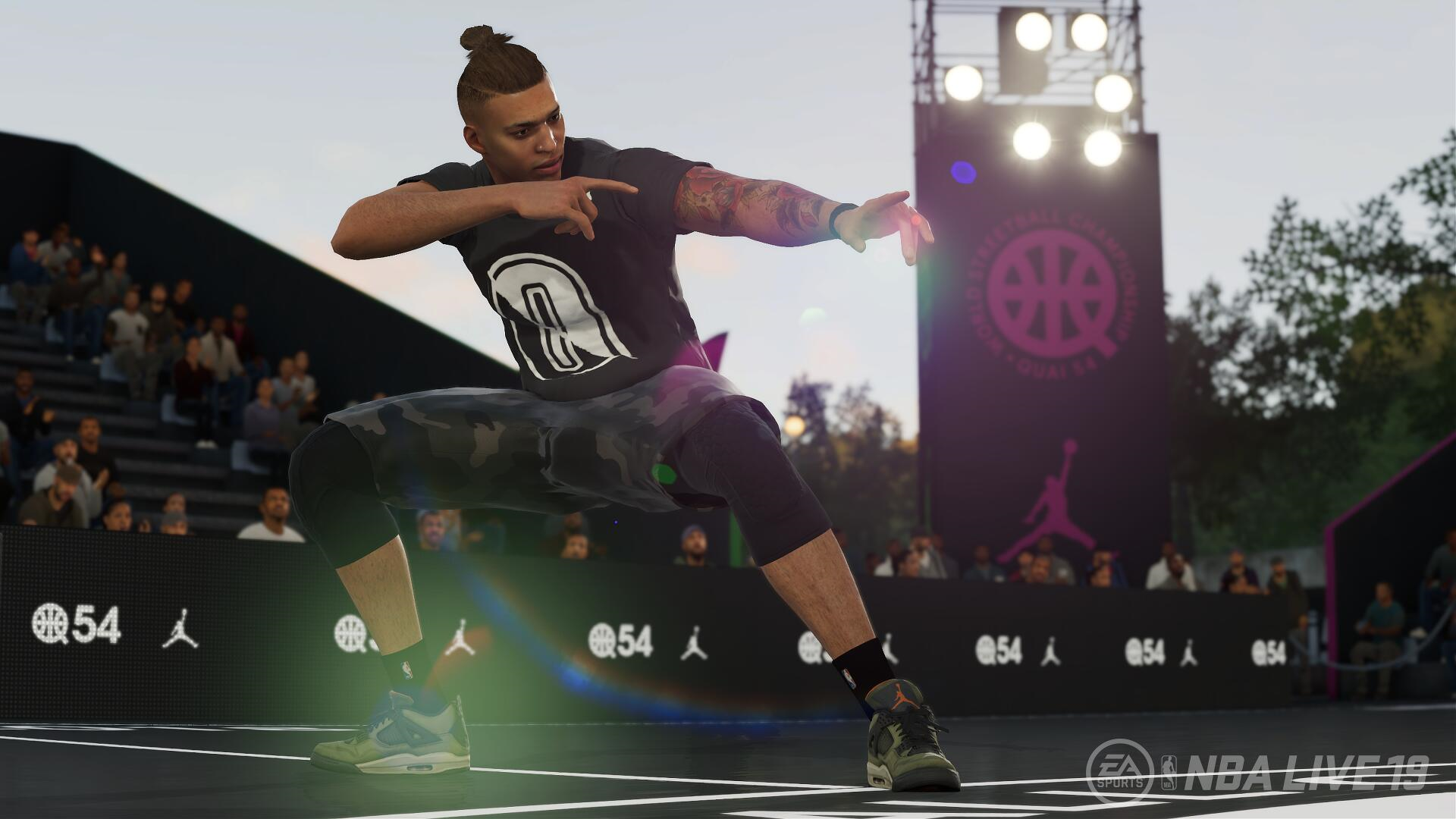 We got to sit down with Connor Dougan, Creative Director for NBA Live 19, for a first look at some of the new features, courts, and upgrades to EA’s basketball title. NBA is going global in The One, the narrative campaign mode which allows you to play on numerous courts, both indoor and outdoor, across the world.

As The One is a story about you, you can actually use the NBA Live Companion App to scan your face and play as yourself in locations such as Paras and Rio De Janeiro, recruiting players, and leveling up your character as you go. One neat feature is that you won’t just see the different locations, crowds worldwide will actually speak in their native languages.

The One takes the RPG elements introduced last year, such as traits, and expands upon the experience, requiring players to take branching paths in the player progression skill tree. Choose wisely, however, because once you’ve committed to a skill path, you won’t be able to change your mind.

As your character progresses and gains experience, he will unlock traits as well as additional slots to equip those traits. This allows you to customize your gameplay to your style; if you want to be able to catch-and-shoot more quickly, you can simply equip that trait, and unlike skill choices, these can be swapped out at will. 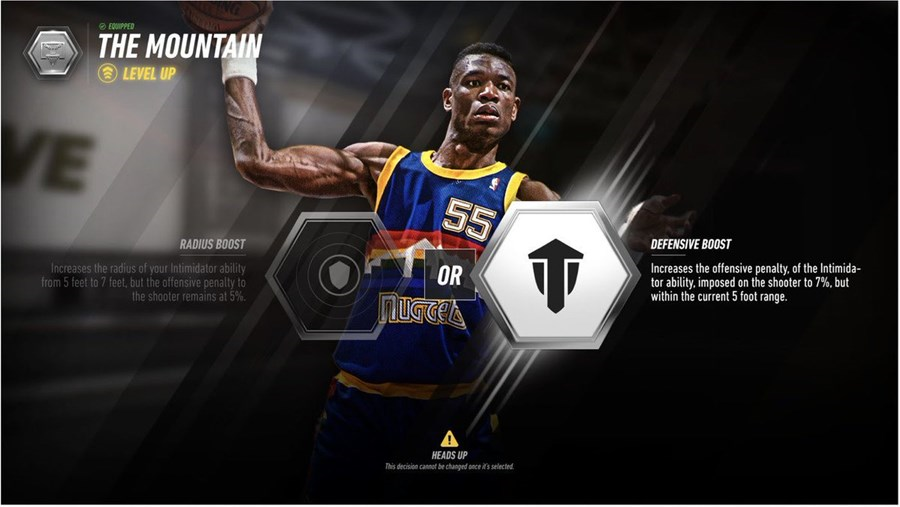 “What’s cool about it, too, is not just RPG elements, we’ve enhanced it so that you don’t earn experience you can upgrade your skills and unlock animations,” Dougan explained as he booted up the game, “and now we have an icon ability path. The other thing is, when you go through the campaign mode, it’s no longer just about, like, upgrading your player, now you can actually incorporate other players along the way.

Like LeBron, I can incorporate him onto my squad, onto my team. You collect players as you go and level up your own character.”

The campaign mode takes you across the globe and outdoors, allowing you to take on new players in new, beautiful outdoor courts. Some games will be 5-on-5, some 3-on-3; regardless of the rules of the court, winning the game will allow you to recruit a new player, the team captain, into your squad.

An additional benefit to newcomers: during the campaign mode you’re locked onto controlling just your character. This makes it not only a story about you and your individual skills, it can also serve as a tutorial, a stepping stone to help ease you into learning the skills necessary to successfully command a competitive five man team. 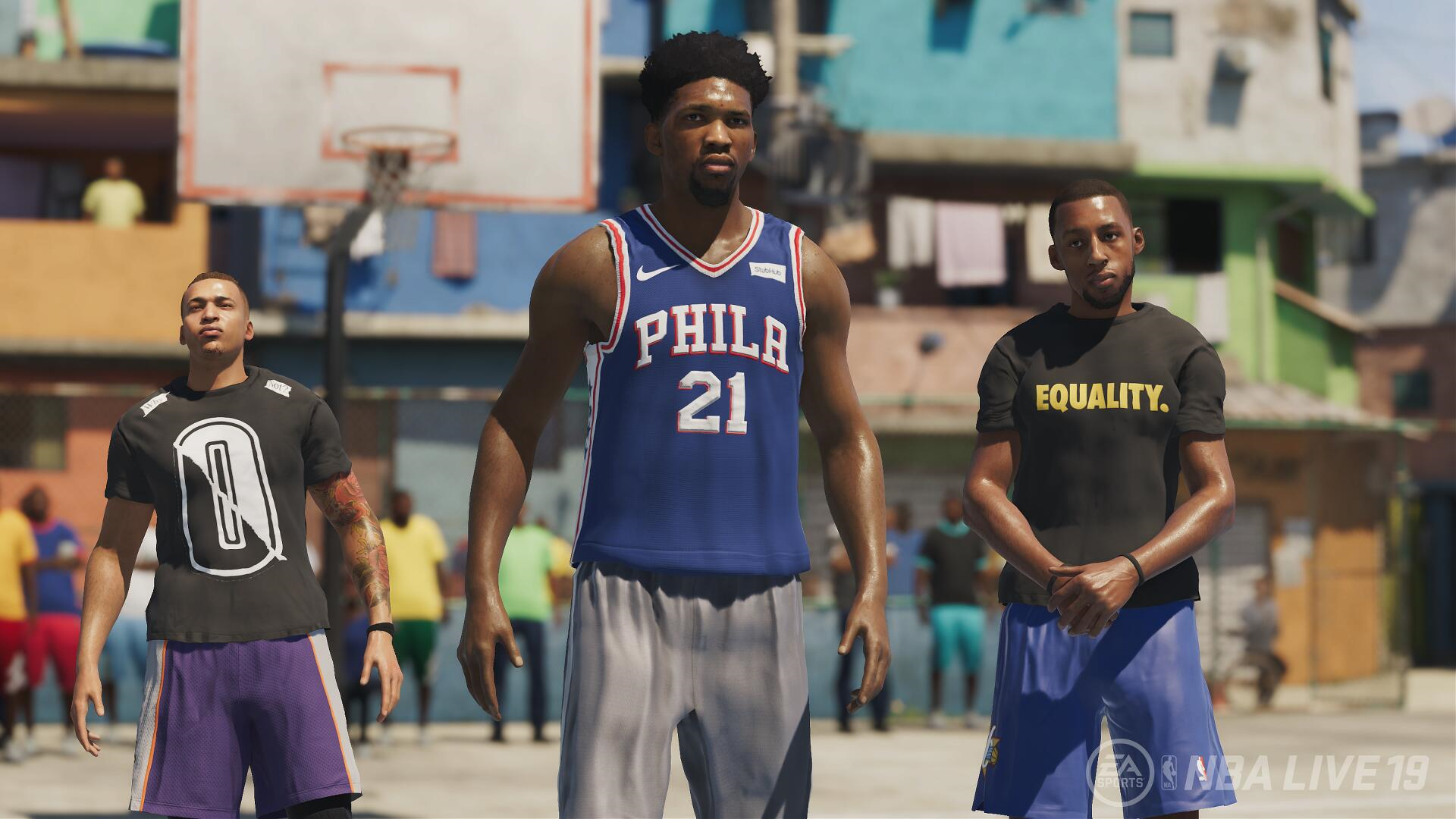 Dougan went on to explain how the campaign mode is taking a new approach to storytelling, and recruiting other people, to commentate on your skills. “The other thing that’s interesting from a narrative standpoint about what we’re doing is, as you go, we now have a capture highlights mode.

So, say you’re playing in a campaign mode, or the League, or whatever, we will start to capture content of all your highlights, lowlights, um, we’ll encode those and play them back to you. But then we have different personalities, people from ESPN talking to you, all the way to like, lifestyle brands, to youtube personalities talking about you.

So it’s a little different, we wanted to get away from like, the long cinematic cutscene story mode and bring in something fresh. ”

That, of course, piqued my interest… will there be any Youtube personalities we’re familiar with? While EA isn’t revealing this information just yet, Dougan was happy to assure that fans of Youtube’s basketball scene will be excited. 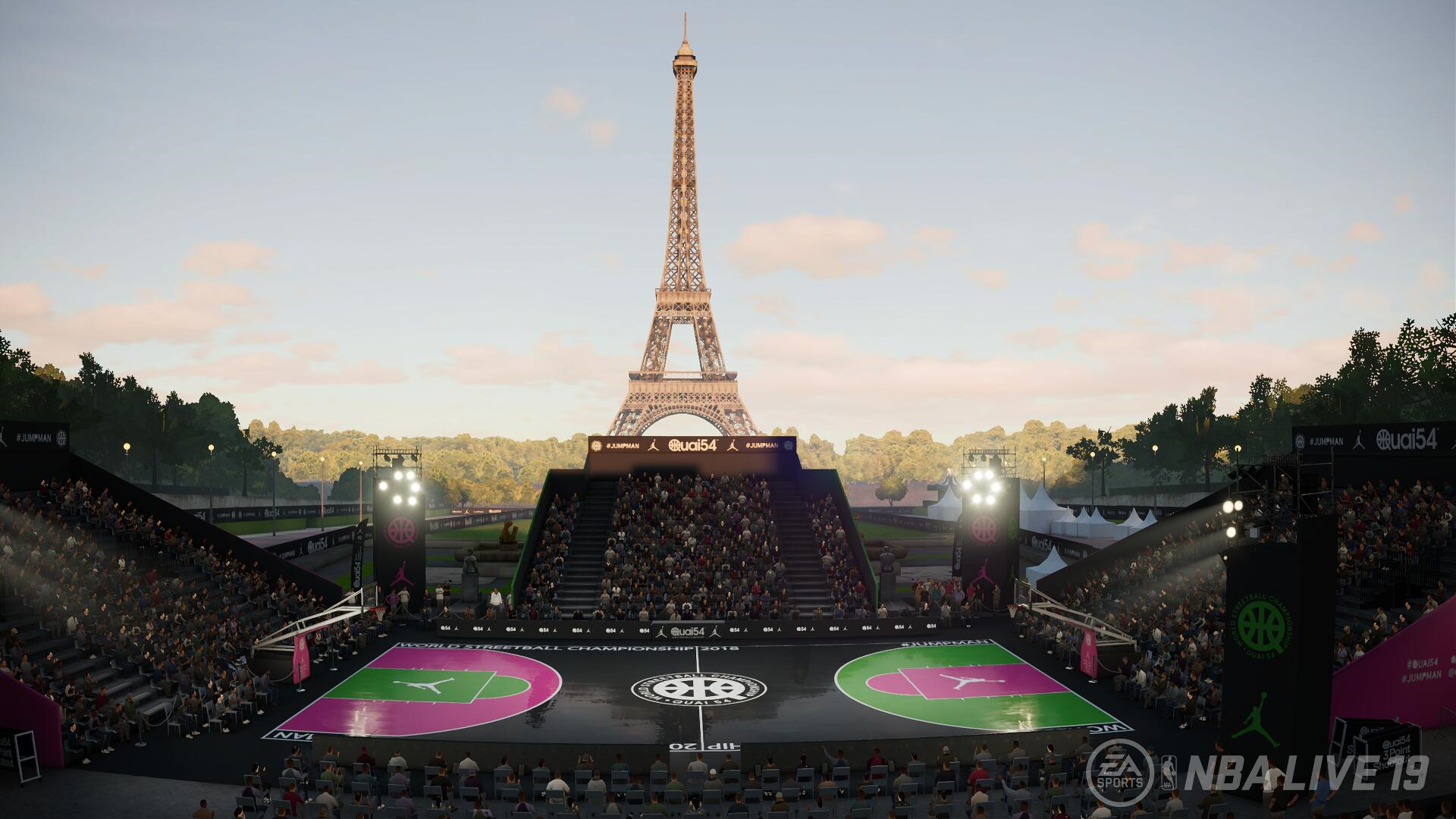 I couldn’t help but comment on the leopard spotted basketball shorts featured in the demo. Fortunately, Dougan was happy to talk fashion. “Clothing is such a big part of the lifestyle!” So just how much can you customize your character’s looks, I wondered?

“So much. I think we partner with… last year we partnered with a lot of lifestyle brands, like Bait and Undefeated, those type of things. So that stuff’s really important to our players.” Of course, every player has their own, unique style, so while you can customize the look of your own character, you’re going to have to respect the fashion of your squad members, as you can only customize the clothing of your own characters.

Dougan lead us through a few games, highlighting the smoothness of the Real Player Motion engine, new tricks you can do, such as dribbling the ball between your opponent’s legs, new trigger assists, dribbling mechanics, and the new interactive environment feature, which takes the crowds and the bench from a background element and makes it a part of the game.

“We have a system were you can smash into the stanchion if you’re going too fast… you can fall and dive into the crowd. If you take a shot near the bench, you might see a player trash talk you if you fall into the bench. We just wanted to give it something different.” 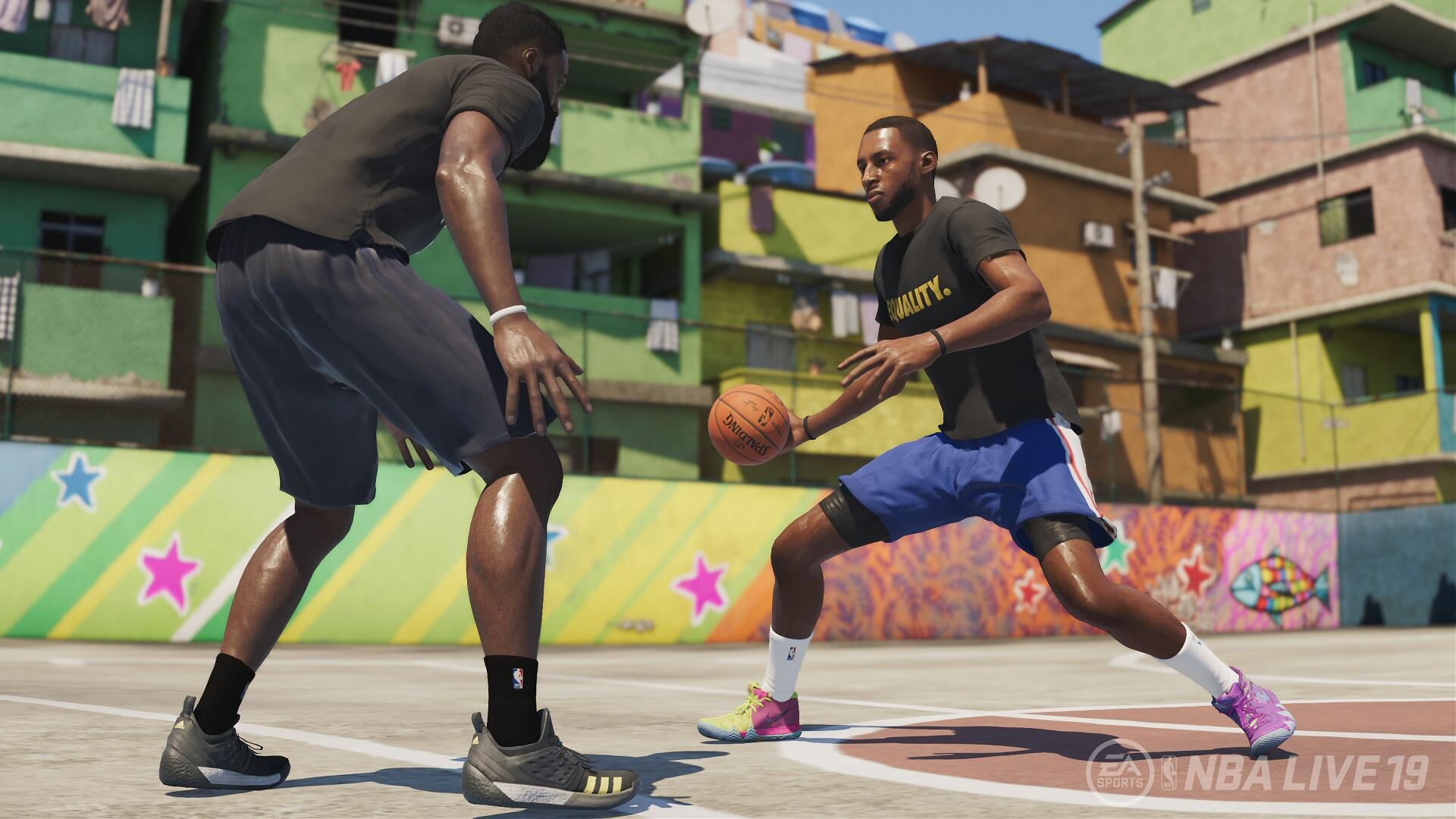 “With our real player motion, we also have signature movement. A guy like Lebron James, if you see him on TV, watch, when he stands, he’s really upright, and his feet are like this [turned out], and he has different mannerisms, where he’s always rubbing his chest.

So we added that kind of stuff to our game. So we have around ten different players that we modeled for those. So with LeBron, all his movements are completely different than everybody else. Way more upright, duck feet always; those little details are very important to our players, and it just makes it more authentic. It’s a subtle thing, but it also feels different.”

Another fun feature includes improvements to the AI, which allows characters to go on good and bad streaks, as well as giving you the ability to taunt your opponents and impact their performance. “The other interesting thing, from an AI perspective, is we’ve introduce the concept of dynamic AI behaviors…

What that is is, once you’re playing against the AI we have different behaviors that we’ve introduced. One is sort of a player takeover behavior, uh, so, in a basketball game, in real life, a player starts to get hot, the team starts to go to him to take all the shots, so we have that same sort of behavior.

Once the star players tarts to go off, they’re going to feed the ball to that player, and depending on his personality type, he’s going to celebrate or taunt more, which is interesting and authentic.

On the other hand, we have instigator behavior, so a guy like, I don’t know if you’re familiar with a Draymond Green type of character, plays for the Warriors, but there’s different personalities among the characters when you’re playing against AI, and the idea behind that is just to make every game feel unique and different.” 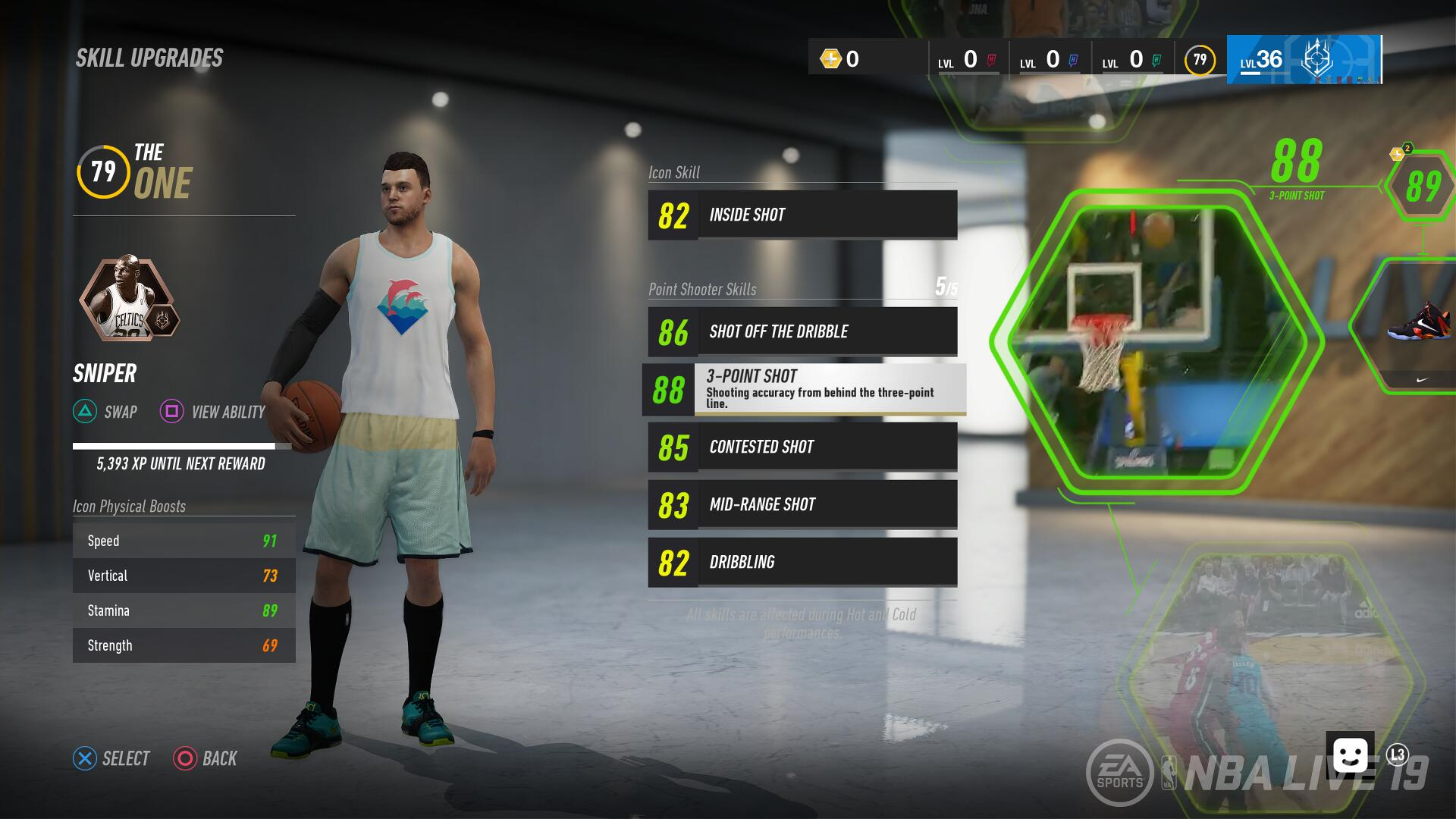 Dougan finished off with a reminder that, as with all their sports titles, EA is committed to constantly updating and releasing fresh content. “I’m actually leaving here Monday to go up to do some motion capture stuff for the game. Whether it’s at launch or after. We’re always adding things like signature celebration, signature runstyles. … We’ll continue to be adding to it more and more.”