My hut story - it's been a while since I played hut

detoxxcxx
56 posts Member
October 6, 2017 11:30PM
I used to love hut before. I started playing in nhl 11 however I wasn't that good my record was just over .500, it wasn't until nhl 12 when I got pretty decent at the game. I absolutely loved nhl 12 hut. You know when you discovered the game mode for the first time and saw how you could make a custom team with your favorite players, I had that feeling for pretty much the entire year. From the day the game came out I was 1st on the LD and stayed all year round. I loved everything about the mode. This was the first team I made that year: 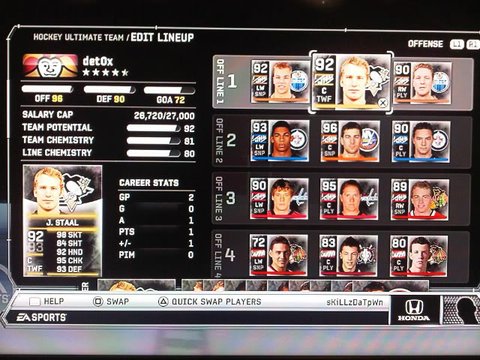 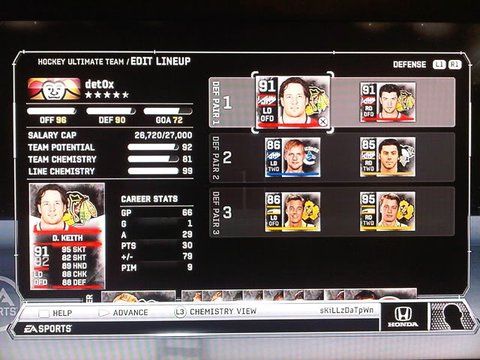 The salary cap was one of my favorite things about hut back in nhl 12, it was really creative when it came to fielding a team. You were forced to use juniors as a 4th line if you wanted to stack your first 3 forward lines, you also had to use juniors as a 3rd d pair if you stacked the first 2 d lines. I absolutely loved this concept. It felt amazing to see how you could squeeze your favorite players and juniors into the cap. They also had training in the game so you could boost your junior players, it went really well with contracts, your training would last as long as your contract you applied to the player after training which made contracts very useful. Nowadays it just seems like contracts are an afterthought. They don't really have any meaning or substance anymore, just throw a 13 gamer whenever your player runs out. Hut used to have contracts all the way up to 80 games. So you could choose if you had a +9 shot for example but only wanted it for 25 games since they were both cheaper, or if you had a +5 all and since they were expensive you would apply an 80 gamer to make it last. Now you can just throw on a team full of legends in the first couple weeks and keep that team for the year, the removal of the salary cap really disappointed me.

I also really missed the victory cards, for example you can see how awesome Keiths victory card looks: 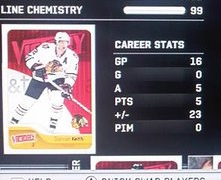 I dislike how they took that away right after nhl 12. It was really cool seeing the card faces of victory cards and it went really well since hut is a trading card mode. I feel like hut lost alot of heart by getting rid of victory cards. Nothing felt better than opening a jumbo pack and seeing the victory card for one of your favorite players. It's too bad alot of you guys that started playing after 12 never got to experience it.

That brings me to the legendary jumbo pack weekends. Ea would put a sale on the modern day gold plus packs and make them dirt cheap so it was actually profitable to buy packs back then. I remember opening up hundreds and hundreds of jumbos. I remember everyone would save up their pucks and go balls to the walls when the jumbo pack came. The best thing was that they did it pretty often too. Nowadays the packs are such rip offs if you pay with hut points. Ea gotta make that money I guess.

After nhl 12 ended I was really dissappointed with nhl 13. With the salary cap gone it didn't take any skill to field a good team, you would just buy the highest rated players and throw them on your team for the rest of the year. Which is how the game is today. However hut in nhl 12 also had a happy medium, there was a no salary cap tournament that would go on and give you good prizes. So if you truly wanted to stack a team without a cap you could. This was my end game no cap team: 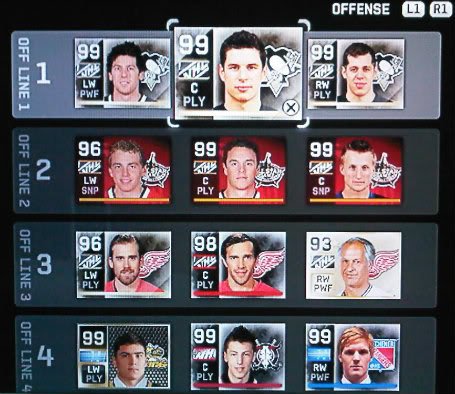 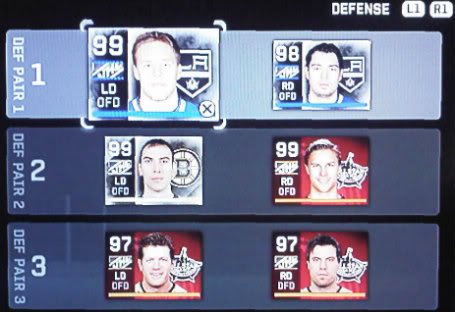 About a month after nhl 13 I quit hut for good and started focusing on eashl with my club. It was a good substitute for hut and I really enjoyed that mode. I played eashl up to this year and never touched hut since the first month of 13 till this year.

Anyways I finally decided this year I'd try to get into hut again. Even though I don't like some things with the game mode, however with the gameplay changes made this year I'm finally enjoying hut again. (game still needs some work but atleast it's decent).

However the one thing I completely loathe is the leader board rankings. I don't know why they got rid of competitive rankings. For example you can see: 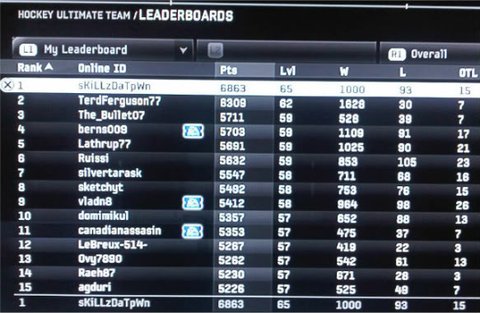 that even though I'm first I have less wins than the guy below me. You would get points for playing good players and you would only get 1 point if you played someone low in the rankings. Back then you could look up teams on EA's website. That's why the guy below me has more wins but less points, he would look teams up and only play level 1 players which wouldn't give him much points. He was known to cherry pick his opponents. I was the opposite, I didn't want to play anyone that had a really low level because it wasn't fun beating on new players. You don't get any better. I always tried to play good players so I would get more points for winning and also that's the best way to improve. I would love playing people better than me, I loved the challenge. It was that mentality that basically made me into the player I am today, sure you get alot of losses but you improve so much. Whenever I played Ferguson I'd win since he never improved, sure he had a nice rec but what's the point if you only play level 1s. I went from having a .500 record in 11 to being the top dog in 12, all because of playing people better than me. I don't know why they took away competitive rankings. After nhl 12 they made the match making better so you don't match up with level 1s anymore. But then recently they took away the ranking for good so now it doesn't matter how good you are, it only matters how much you play. That's the biggest thing I'm disappointed about besides the removal of the salary cap.

P.S. Anyone remember when goalie stats didn't matter and it was all about how tall the goalie was? 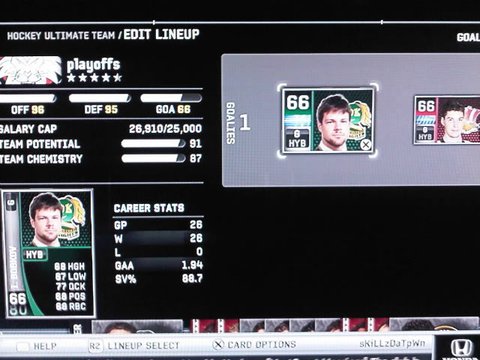 the Igor bobkov jason missiaen era was pretty funny. You'd see amazing teams with 60-70 overall goalies, this was the year that Ben Bishop became an elite goalie in hut even though he was still in the AHL at the time.

Anyway for this year I started about 2 weeks after the game came out when I got a free copy for game testing. I tried my best to buy low and sell high and after about 2 weeks I finally completed my team. https://hutdb.net/18/builder/904632 I do need to change some players like ekman and suter since I have extra CP synergy, however I really like how my team turned out. I decided not to spend any money since year - last time I did was back in nhl 12, man let me tell you it feels really good to be able to field a decent team without spending any cash. My team is pretty bad compared to some of the guys on this forum but I'm happy how it turned out. I started playing cs last night and hit top 200 for now in about 9 wins or so. I finally got that itch to play hut again which I never had for about 5 or 6 years (last time I played hut). I just thought I'd share my story/rant. Maybe I'll bump into one of you guys in cs, it should be a good ol fun hockey game