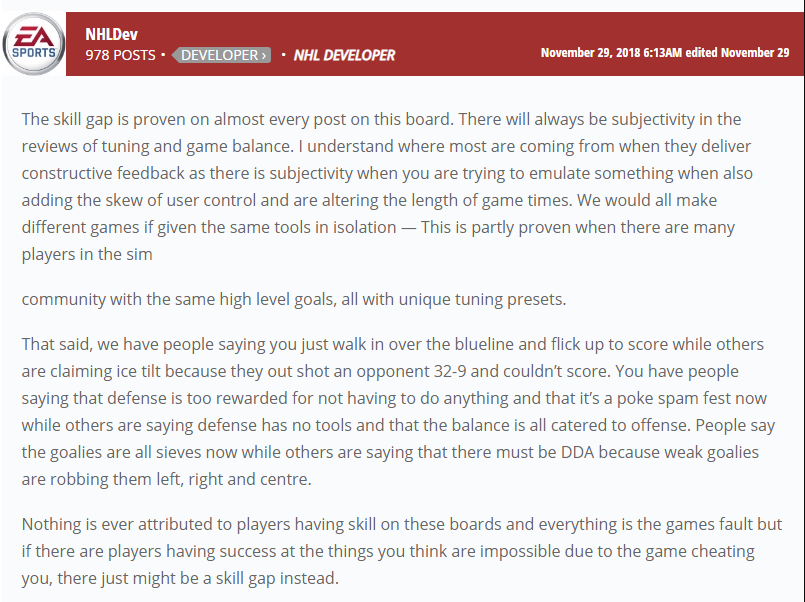 This may sound like a broken record but here are my thoughts. What are yours?

Outplaying opponents in every aspect of the game and losing/grinding out OT wins has been a complaint of this franchise for many years now. Call it what you want (Ice Tilt, DDA, connection, unrealistic goalie reflexes, etc) but I'm sure we could dig up threads discussing this matter in many previous iterations of the game. There is absolutely NO WAY that a dev can turn the game on today and say that it plays anything like the game did at release. Everything the community hated about '18, from a gameplay perspective, is now everything the community hates about '19 with the tuning/patches that have taken place. The game does not reward hockey IQ, it does not reward innovation and it certainly does not reward team play. We are back to the watered down, monotonous, cheese fest that has plagued this series for far too long. If skill gap to the devs is determined by who can abuse the vulnerable spots on the ice, then this is the last version of this game I will ever purchase.

Moreover, for those that argue that players who are predictable are easy to beat, I agree with you 100%. However, who wants to play every game, multiple times a day, defending against the same 2 or 3 tactics? The things we see in today's version of the game were not feasible at launch. Why do you ask? Well when little Jimmy cuts inside for his patented SS wrister, one of two things occurred. My goalie made the easy, REALISTIC save or Jimmy got LAID OUT. When little Jimmy skates to the corner and tries to shimmy back and forth waiting for the AI to leave the man open in front for a one-t (I play 95% OVP) he got bumped off of the puck and it was a turnover the other way. When little Jimmy wanted to be a one man show and not incorporate his teammates into the game, he got dummied.

No one will ever be in 100% agreement with how a video game performs, but it is CLEAR that an overwhelming majority of the player base is all in agreement that the game should be reverted back to 1.00 or 1.01 tuners. If the argument is that skill gap is the reason for complaints and that is the reason turners won't be rolled back then why was the same approach not taken at launch when all the whiners screamed for poke check and stick lift nerfing? My assumption would have been that those folks couldn't adapt/adjust to the skill gap of those who could manage to play games and stay out of the penalty box.