In NHL 19, goalies did not have an expansive tool set to control the puck - too often resulting in soft rebounds and scoring chances. In NHL 20, goalies in position and in control, will have the ability to take over the game with all-new controlled saves, redirects and a whole new suite of covers. Additionally, AI controlled goalies are more aware of threats on the ice, impacting their positioning and how they handle the puck.


NEW CONTROLLED SAVES AND REDIRECTS
In the past goalies would play blocking saves with their body regardless of how easy the puck was to handle or how prepared they were. Now based on a goalie’s skill (attributes), how in control/position they are before a shot arrives and the reaction time they have (speed/distance of the shot) they can make controlled saves to hang on to a puck, pinning it against their chest, collapsing in to hang on in their mid-section or making a more controlled glove save so that they can avoid giving up a rebound and control the play. Goalies can then choose to hang on or play the puck if they have enough control and it’s viable from where/how they pinned/hung onto the puck.

In addition to controlled saves, goalies now have the ability to control the outcome and redirect a puck depending on the situation. The ability to redirect the puck with control will be based on a goalies attributes, how in control they are, and the reaction time they have in each situation. In the past goalies could kick out juicy rebounds, even on pucks that were slower on net that they could have controlled. You will now see goalies use their sticks, leg pads and blocker to control and send the rebound away from danger (i.e. a stick redirect up into the corner glass, a blocker punching the puck out away from danger, or a leg pad kicking the puck out to the corner or out in front depending on where the incoming opponent threat is).

With these new tools, goalie differentiation by skill will be even more apparent. Some of the best goalies will be able to hang on to or direct harder shots with little reaction time away while weaker goalies may still give up juicy rebounds on shots they could have handled.

NEW COVER SYSTEM
NHL 20 introduces a whole new suite of covers for goalies, adding to their overall coverage by giving them the ability to cover the puck out of more positions. Goalies can also now resolve covers without having to reset and start again, making them more responsive in the mechanic. They are more authentic and responsive in their animations by being increasingly direct to the puck, and in the postures they use to protect the puck and themselves.

THREAT ANALYSIS
AI goaltenders in NHL 20 are more aware of threats around them, impacting their positioning and their ability to deal with different scenarios. AI goalies will be more aware of the threat of the puck carrier to score, impacting when and how they challenge the shooter vs. stay deeper in their net. This will lessen the chance of over-committing when the only threat is a pass or shot for a rebound. As the puck carrier becomes more dangerous, getting in closer to the middle of the ice and the net, especially if the player is on their forehand, you will see goalies challenge them more aggressively, increasing the need for the puck carrier to move the puck to open up a better scoring chance. 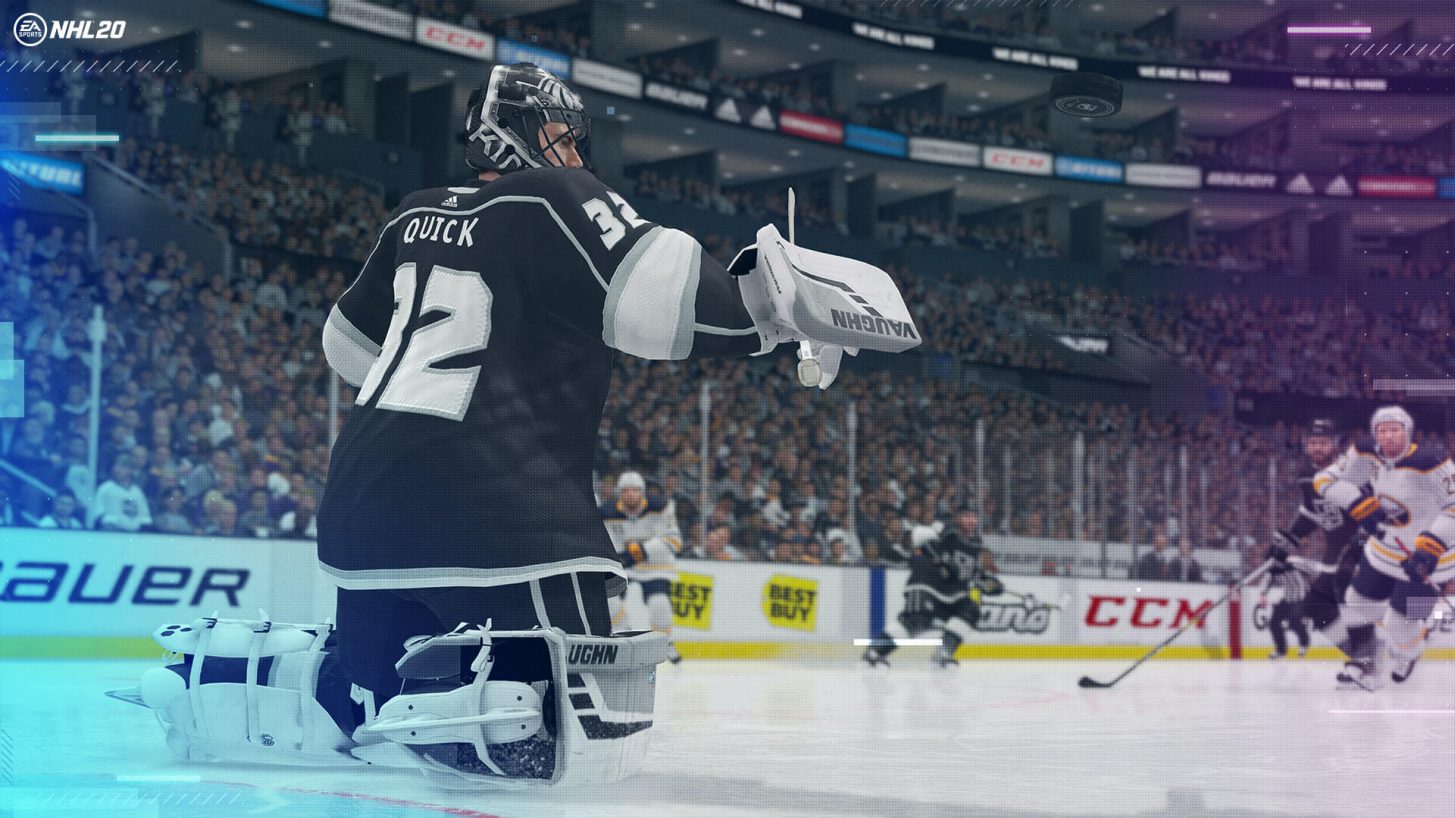 Goalies positioning and aggressiveness to track the puck and cut down on shooting angles will also be impacted by their teammates defensive positioning. Defensive AI has been updated to add more logic to identify the threat of the puck carrier to have a good chance to score with a shot. This may change their defensive positioning to stay closer to goal side than the direct passing lane. This allows them to gauge whether a rebound threat is more dangerous than a pass to a player with a weaker one-timer. As the one timer threat becomes more viable, the defensive players position will be tighter and heavily favor the direct passing lane.

These improvements will narrow the windows in which the offense has to make choices and will increase the need to work for good shooting positions and passing lanes, ultimately leading to more earned goals.
0