Festivus is over but I still have grievances... 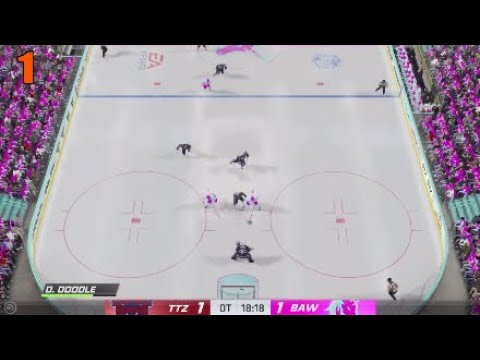 1. Not only did I poke the puck, the ai comes barreling down and almost puts the puck into the net (it was good for us but the puck shouldn't stop on the line like that).

2. The puck gets stuck on the boards when I attempted to pass.

3. This is just an example of the **** that happens (and it only ever happens against a team with 500 CR less than yours. I am a Sniper with one-time wonder, booming slapshot, and offensive awareness. We were forced into overtime with 40 shots while they only had 5 and their goal was from the computer just doing a simple backhand - it's moments like these that make people believe in the ice-tilt and while it doesn't actually exist, the fact so many people come across this type of situation should be alarming.

4. What an awful pass by the computer. To make matters worse, I was purposely trying to trip the guy in our zone to prevent the goal but for some reason the game decided NOPE. That's not very cash money of you, NHL.

5. Doesn't matter if I pulled my stick to the side - the computers are ALWAYS going offside. Please please PLEASE fix this for next year, if not this one.

Unnumbered clip. Yeah, cool, thanks for going for the puck,buddy.

6. Should be interference; doesn't matter if he pressed the hit button or not if it knocks me down like that.

7. What a stupid pass; they keep doing this.

8. Another dumb-dumb play - It's like a game of Space Invaders but the user keeps shooting where they are, not where they're going (ie, they aren't anticipating for anything once the puck leaves their stick).

9. Even though it got through that pass to the left was dangerous and stupid; if I could, I would roll up a newspaper and smack that computer on the nose. Why on Earth would the LW pass back like that (and to me no less)? Deke to the left or pass to the LD. (Yes my pass at the end was bad but it wouldn't have happened if the ai did what he should have (I scored right after that anyway))

13. Computer then proceeds to get knocked off the puck in that left corner - this happens so much, please look into this; that specific spot is like a bermuda triangle for the computers attempting to clear.

14. I really don't like these dumps. Our RD is far left, sure, but Kong could have easily picked a different play, especially on a PP.

15. RD was playing left so we could give the Ai a better hand to work with (please let us customize this) - the problem here is the hipcheck button mapping; it's so awkward and can lead to stupid tripping penalties like this

17. I'm LW playing right so we could get a better shot - problem here is the lack of defensive play from the computers. Yeah, just let him waltz right through why don't you?

18. That's some weak lamesauce my dude.

19. Another turkey play on the left side of the ice.

21. Computer needs to at least try to poke.

22. Winger covers their D while our D should protect the net - AI very nearly cost us because he was daydreaming. The fact I swooped in when I knew there would be no pass to the D should not affect the AI's priority target which was the puck.

23. What the f are you doing, AI? We actually scored in the next play too which makes things even more heartwrenching.

24. Took way too long to pass up to the RW. This is how touch-pass mishaps take place. Humans need to constantly slow down.

25. Another stupid pass up the middle. That team, in particular, is one you can't afford to do anything wrong on so this computer was lucky it ended up being offside....

27. Mate, this is so dumb. I hit the guy I wanted and the hit assist followed through into the other guy - Collateral damage like that is not a penalty. Of course, they scored on that powerplay too; had to take it to OT to net a flubber.

28. Shake my head, I'm telling you, the LD isn't like all the others. My buddy being RW on the left side (again, to have a better ai handedness) should have 0 bearing on the play made.

29. A weak attempt at defense when set to high pressure.

30. All I want from Santa this year is a computer who at least tries to make a move.

32. Not only was it a terrible pass, the defender didn't even try to poke or anything.

33. Puck made it through but that was still a dangerous pass to take; he had other options.

34. Another horrid pass that led to a goal. Told you, we can't trust the ai to just take a second to think.

36. Human was clearly faster and in a more advantageous spot, why was there no pass? This happens so much.

37. This has happened 3 times now. I tried moving away, pressing L1, I even let go of the controller and somehow I got the penalty. I tried everything I could to avoid this

39. Lack of effort from the computer there.

40. This stupid idiot staring off into space...

41. This happens a lot - goalie needs some tweaking.