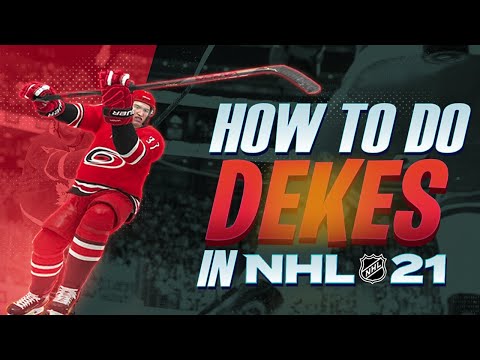 At first glance it just looks like bad defense - and don't get me wrong... it IS bad defense - but my issue with this particular play, despite my poor defending, is the A.I. just casually letting a player get positiong in front of the net for seemingly no reason:

I believe they maybe had a hiccup in their decision making because they 'assumed' I would continue my defensive pursuit with DeMelo - unfortunately the player got around my DSS so his pass made it through - I'm just not sure why the A.I. left that player alone.

For years I have despised the A.I.'s inability to recognize the development of odd-man rushes. I think NHL 21 finally nailed it.

Here, a 3-on-1 develops. In previous years, the A.I. would slow up and focus on defending - while still having possession! This year - this is not the case. This GIF makes me so happy - although I know the defender is all out of sorts here - but that's the beauty of odd man rushes - you're forcing a decision from the defender and it seems here he is all out of sorts:

I love chipping the puck. I also love that - as of now - I can't find a way you can exploit it. This move allows you to expose defenders who want to rush you:

I am absolutely loving the fidelity of DSS this year. It's far more active - which is exactly what we argued about on the forums last year. DSS is even more effective as a forecheck tool this year:

And of course, inside your own blue line - DSS is knocking the puck loose and keeping the trajectory of the action - meaning you can direct where you want the puck to go with the direction/speed of your stick:

And this is my favorite part of that forecheck:

LTing is still burning my chaps.

Maybe I'm not defending it properly.. but here's a couple of instances that have left me scratching my head:

Since being introduced, they've been a contentious issue among the community. Do they work, don't they work - what are they really.. etc.

Finally - in NHL 21 - you can utilize puck pickups effectively. I've only been able to capture one instance of me doing it - but it gives me hope that I can use it more and more moving forward: