EA_Blueberry
4836 posts EA Community Manager
October 7, 2020 5:15PM edited October 2020
HUT RUSH
NHL® 21 introduces HUT Rush, a new mode that allows both HUT and non-HUT players to jump into a quick Online or Single-Player game of THREES, 3-on-3, or 5-on-5 gameplay. In HUT Rush, you’ll earn points to unlock HUT rewards not just by winning, but winning with style. Some Events will allow you to Draft a team, while others will require you to build a team from your HUT Collection. Expect to see a variety of different Event configurations through the year, with different Rules, Gameplay Styles, Lineup Sizes, Objectives, Draft Pools or Team Requirements, and more. Some weeks you may be asked to Draft a THREES lineup with Mascots and Icons, while others you may be asked to bring your best 3v3 Line from your HUT Collection. 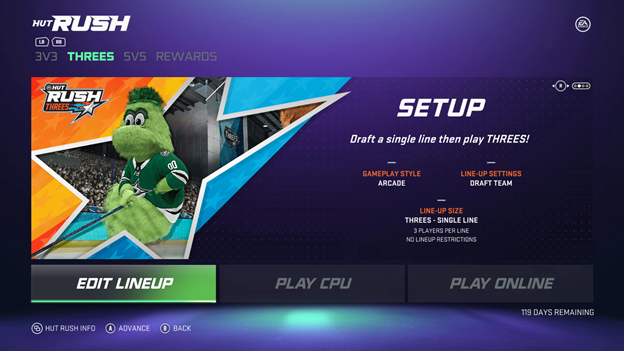 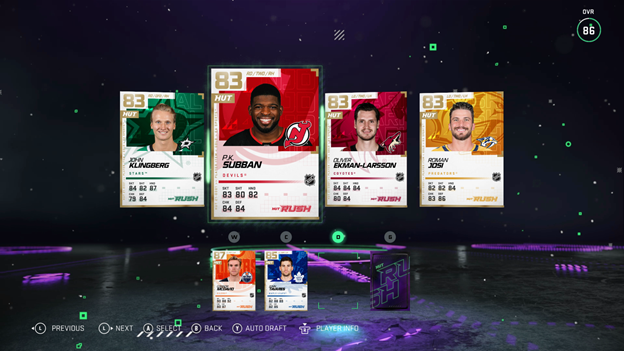 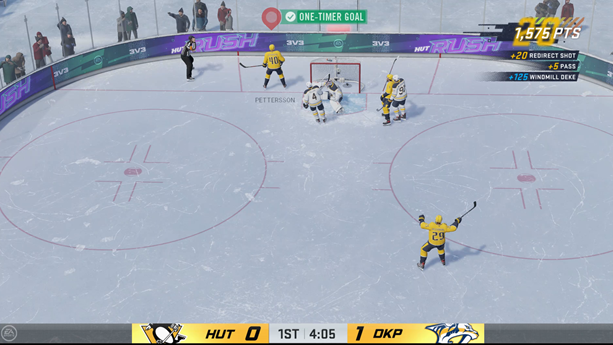 When you score a goal in HUT Rush, the previous 3 actions you performed will generate a Combo, increasing your Skill Points value based on the complexity/difficulty of the actions. Actions will only stay in your history for 5 seconds (subject to change) though, so you’ll need to string together Combos quickly and skillfully in order to maximize your points. 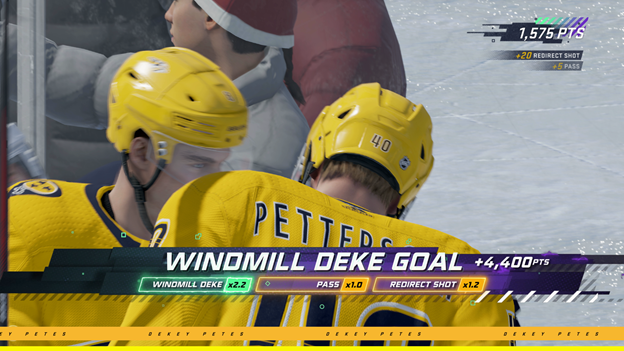 Lastly, each Event will have up to 5 Event Objectives. These Objectives will reward bonus Skill Points towards the current Reward Season when completed. 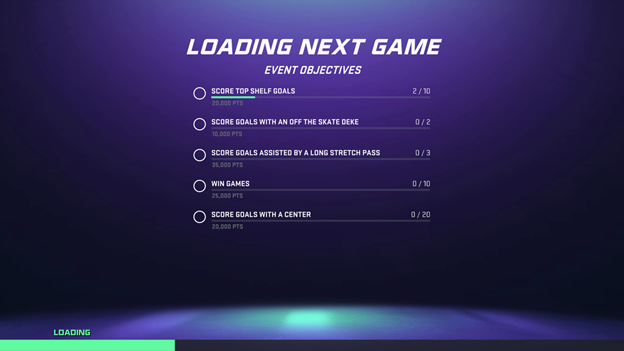 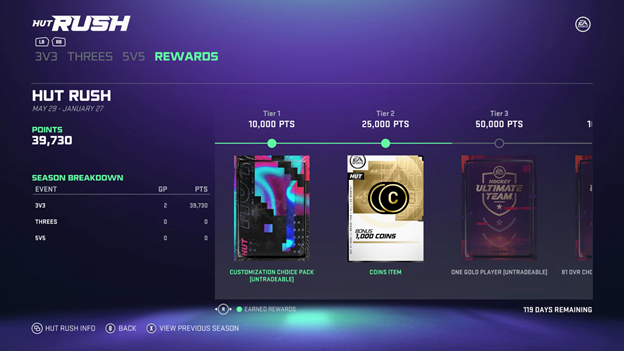 As you earn Skill Points you’ll progress through the Reward Season and unlock a reward at each Tier. These rewards are available immediately after reaching the Tier through your normal HUT Item Inbox or Unopened Packs. 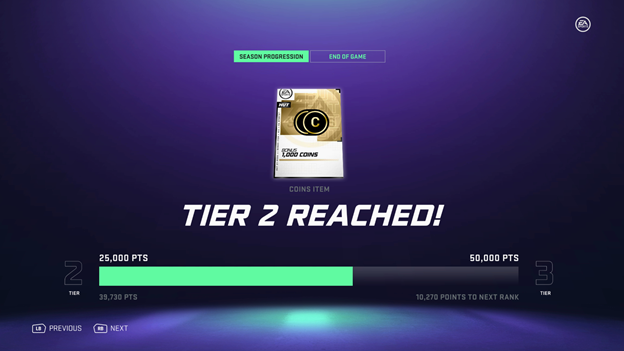 Synergy Icons
In NHL 21 Synergies will be displayed by using Icons. Synergy Icons will be either Silver (for Player Synergies) or Gold (for Team Synergies). Synergy Icons on player items will appear transparent or empty until that particular synergy has been completed. 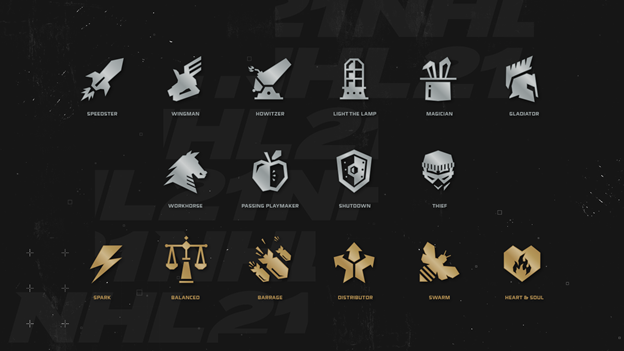 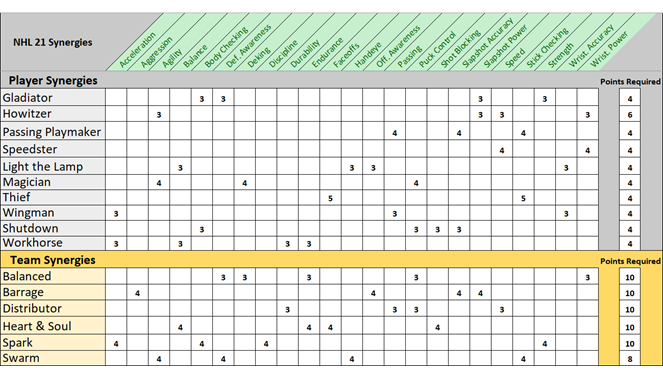 Player Bio
A new update to help with team building around synergies is the “Preview Synergy” function in the player bio screen. This will allow Users to preview potential synergy boosts to players before they have completed the synergy. Once a synergy is completed, the User will be able to see the boosted attributes from activating that synergy.

Auction House
The Auction House has been updated to display how many synergy points the User will require to complete their synergies while they are filtering by Synergy Style. This will limit the amount of times the User has to go back and forth between Edit Lines and the Auction House while building their team.

No More Contracts or Injuries
To reduce the game-to-game maintenance required to manage your team and let you get into games faster, there are no Contract or Injury items in HUT 21. Players can still be injured during gameplay, but these injuries will not carry over from game to game.

Contracts and Injuries have been replaced with a mix of other items in packs, such as Players or Customization items.

The only players in HUT 21 with limited contracts are Loan players, may have contracts limited to a number of games, or a specific time limit.

The OVR Ranges for Master Icons are: 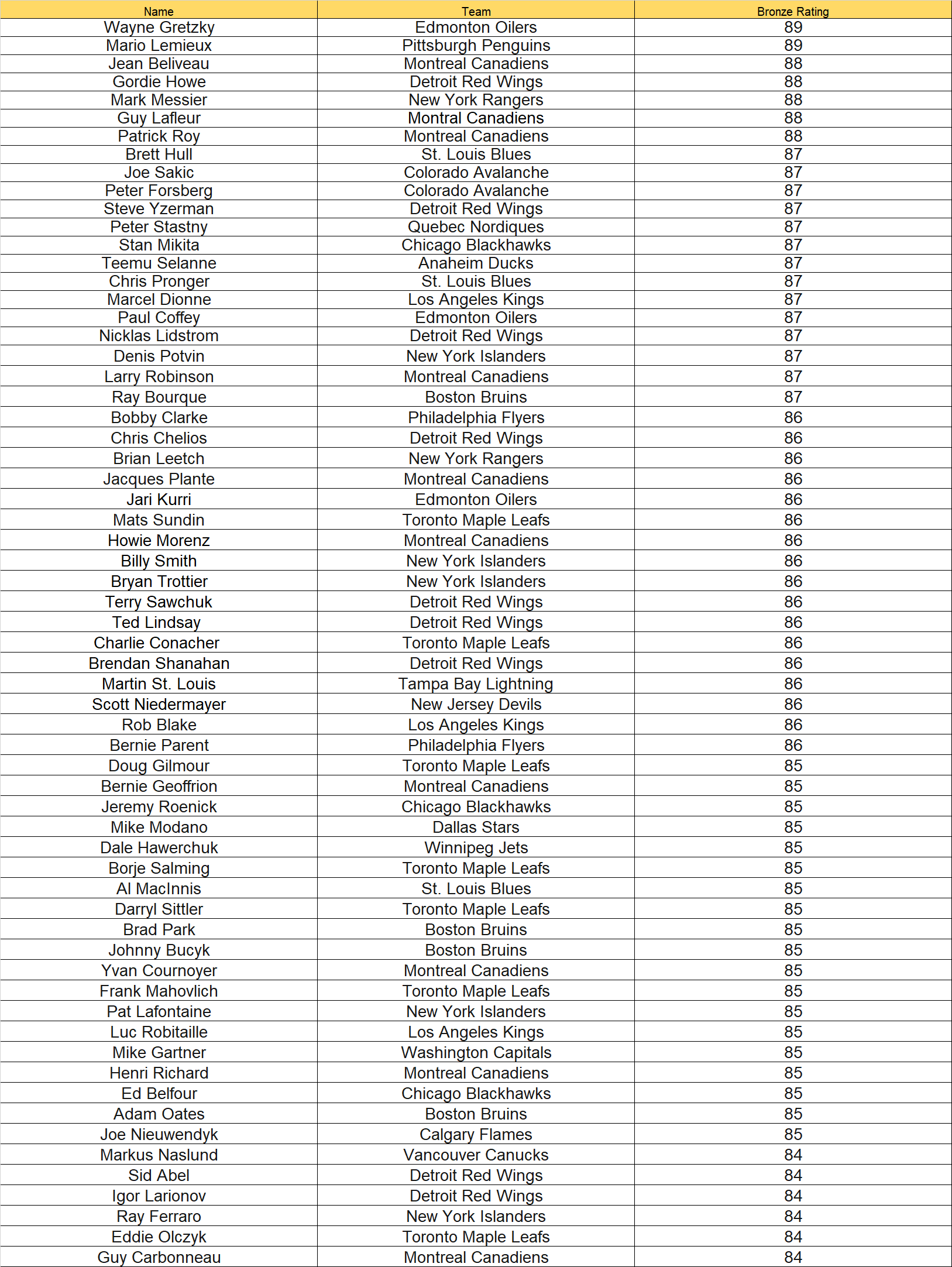 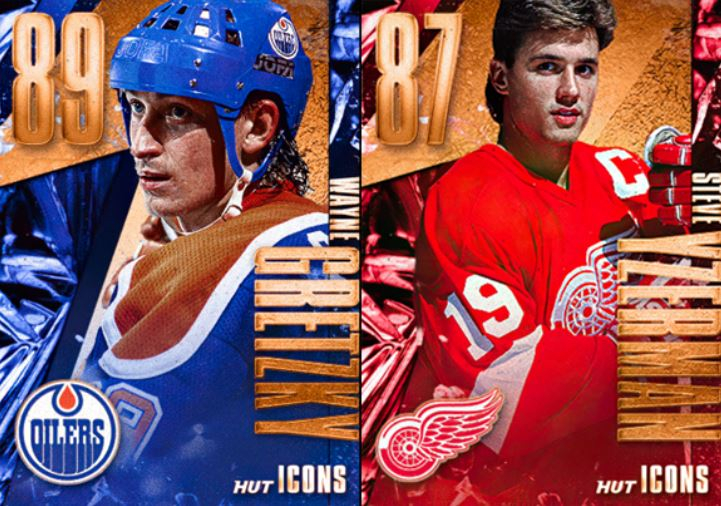 Price Ranges
Starting in NHL 21, we will be introducing a new feature to the Hockey Ultimate TeamTM Auction House called Price Ranges.

When Price Ranges are active, every tradeable HUT item (Players, Collectibles, Coaches, Customization items, Team items) have a minimum and maximum coin price they can be sold for on the Auction House.

We’ve also added quick shortcut buttons which allow you to quickly set the Starting Price or Buy Now Price to the minimum or maximum price when listing an item for auction.

FAQ
What are the benefits of Price Ranges?

Price Ranges was implemented for the benefit of the HUT community with the following goals in mind:

Will I still be able to trade with items?

Yes, you will continue to be able to make trades with items. Price Ranges only impact bidding and listing of items in the Auction House.

How am I going to make coins through trading now?

Price Ranges will always be wide enough for the prices to grow organically with supply and demand. You can continue to earn coins through trading in the Auction House.

What about events? Will limited, high value event items have ranges that reflect their value?

Price Ranges are based on the real market value of items, and we will monitor and adjust the ranges based on market activity.

How do you determine the price ranges per item?

We review all the trade data in the Auction House to determine the price ranges.

Team Building Sets
We’re bringing back Team Building Sets for all NHL teams in NHL 21. You’ll be able to redeem all players rated 83 OVR and below on each NHL team for a special 85 OVR Reward Player, and for most teams, additional Pack Rewards as well. The 85 OVR Player you’re able to earn for each team is untradeable, but Pack Reward contents are generally tradeable.

Removed Game Modes
With NHL 21 introducing HUT Rush, along with HUT Rivals being introduced in NHL 20, we’ve removed Online Seasons and Draft Champions from NHL 21. These decisions were made to streamline the Online experience in HUT and ensure matchmaking pools aren’t too diluted which would result in longer matchmaking times.
HUT 21 LIVE SERVICE

Intro
Firstly, we just want to start off by thanking everyone who participated in HUT 20. We worked really hard to make positive strides for the mode to keep it a competitive, balanced, and fun team building experience. Player feedback throughout the year was a huge part of both helping us improve during the HUT 20 year, as well as focus in on change and improvements we look to make for HUT 21.

Goals for NHL 21
Based on discussions with the community, and our gamechangers, there were a couple of clear goals for us that we really wanted to try and focus on and address going into NHL 21; the first is re-examining our progression system (especially as it relates to its effects on gameplay throughout the year), and secondly; trying to find ways to bring more variety to event designs and creative executions.

Player Progression (Skaters)
We felt NHL 20’s progression was improved over NHL 19 by offering a more consistent, steady, and stable OVR progression - but we felt there was more work to be done in terms of how our increasing attributes also affected gameplay as we progressed through the year and the influence this had on team building and how differentiated player items felt from each other. The most notable attribute(s) that came up for discussion were speed and size.

As Players receive a +1 upgrade, their speed/acceleration will only increase +0.5 Points.

Below is an example of how a progression could look for a larger stay at home defenceman like Zdeno Chara, compared to a faster player like Connor McDavid. 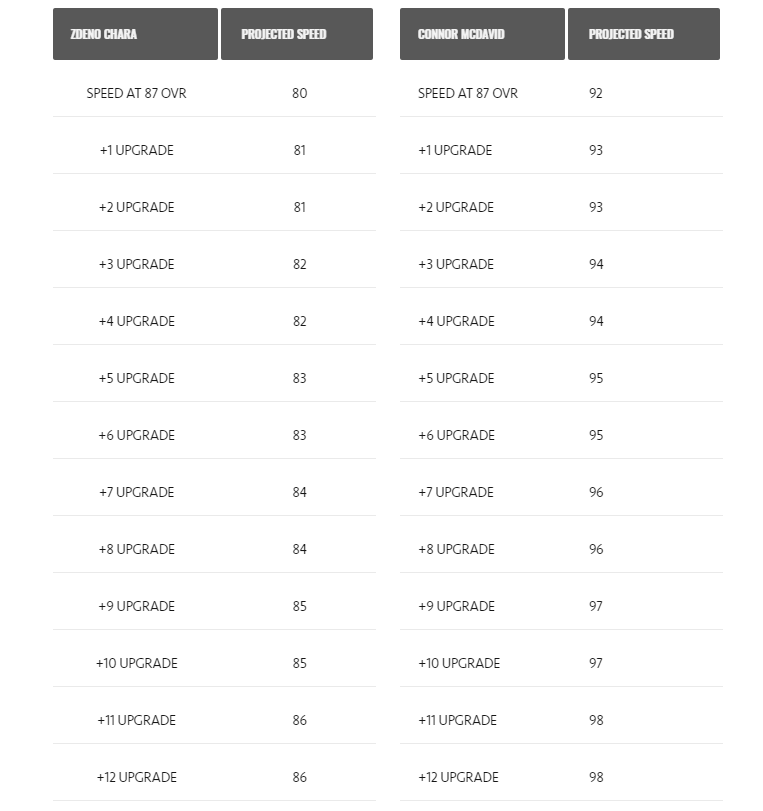 We think the combination of the lower starting point, and slower rate of increase will help stabilize speed ratings for a much greater period of time, help create and maintain a speed gap between players who should be fast, and players who should be slower. The goal of this is to help make sure Player Items can maintain a feeling of being differentiated from each other, and contribute to a more interesting team building experience.

Player Progression (Goalies)
There’s been a lot of discussion on goalies throughout the past number of years, and a lot of said discussion has revolved around a goalie’s height, and aggression. Similar to HUT 20, Aggression will be considered a “Tendency” and not an “Attribute” and therefore will not increase on progressively higher OVR items. We’re also planning some changes on how we take into account a goalie’s height into his attributes - as the size advantage of a goalie has been known to a distinct advantage to a point where the same few taller goalies have become the only items to chase every year.

In order to help better balance this, we’re building in Attribute Caps for goalies based on their height as we progress them throughout the year. There will be a very few select exceptions to this rule (with some Master Icons), but we feel this will really help generate some interesting discussions around the best goalies in the game as we progress throughout the year. 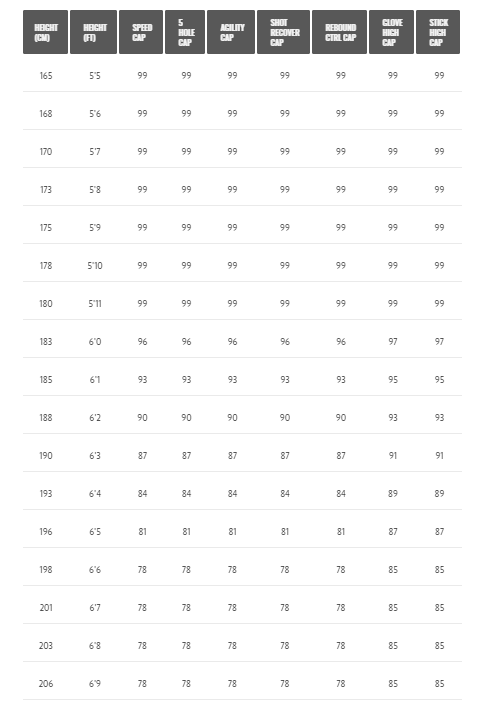 Lit vs Grit
Much like NHL 20, we want to make sure we’re delivering a combination of new events, as well as trying to deliver on favourite themes from years past. It’s important to us that your HUT experience feels fresh in a new season, and with that we’re very excited to announce a brand new event for the launch of NHL 21: Lit vs Grit.

This event is about getting into that GM mindset early on, and trying to decide the identity of your team, do you build it with the flash and skill of today’s young players, or the grizzled veterans that you know you’ll need for those big games. Check out the first Master Items below: 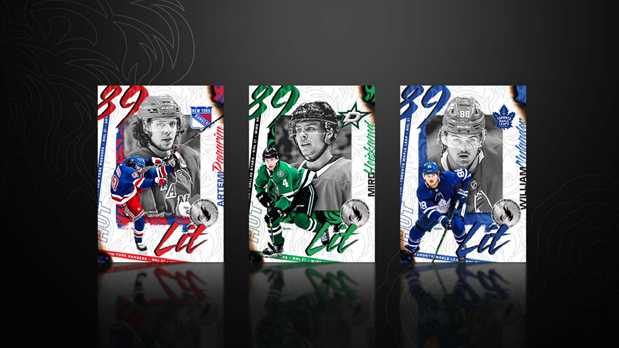 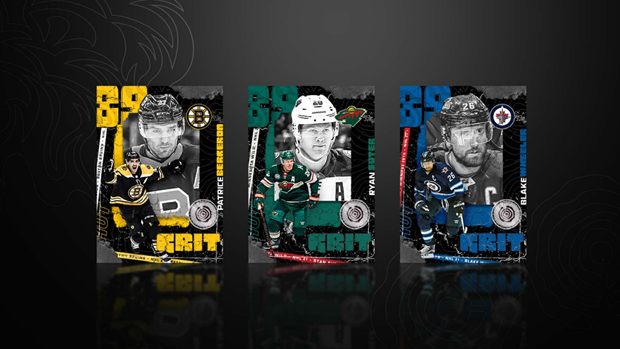 Master Items
Speaking of Master Items, we also wanted to try and bring something new to the table with them this year. For most events, we will actually have two versions of every Master Item; a standard version and an elite version that will be higher rated. But the acquisition and upgrade methods for these are something we’re planning on changing and shifting throughout the year to help contribute to making each event more unique.

TOTW & Squad Battles
One other change this year is that we’re retiring the traditional Challenge TOTW mode, and will be integrating TOTW into Squad Battles this year. We hope this can make challenging the Team of the Week more meaningful and enjoyable as you’ll be able to make Squad Battles progress with it. This means that Squad Battles schedules will now run Wednesday to Wednesday each week to line up with our TOTW content releases.

European and Junior Players
Last year we felt we made some strides to better integrate European league players and Juniors into HUT. Our goal with the mode is still to make sure we’re best reflecting everything going on in the hockey world. We feel it’s important to re-state our commitment to this in NHL 21 so that whether you’re a hockey fan in Kitchener, Halifax, Saskatoon, Gothenburg, Turku, Munich, Vienna, or Bern that you know we care deeply about giving you the chance to build a team with your favourite players and local heroes.

Icons
We have over 400 Icons in the game (not including the Master Icons), and we want to announce our plans to have all of them available in packs at the launch of the game. Essentially all Icons will have a “Base” item, but they will still be more rare than current NHL Players. We feel this gives players an opportunity early on to acquire some of their favourite NHL’ers of years past without needing to wait for a content release later in the year. We’re hoping some players will be excited about the return of some NHL greats to the Icon group this year such as Jarome Iginla, Eric Lindros, John Leclair, and Martin Brodeur.