Do inventory items contribute to the deco limit? 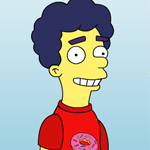