I can't defend this game

Deeznutz32211
97 posts Member
June 2, 2021 1:57PM edited June 2
I'm all about learning the way a game is intended to work and then "getting good" in those parameters but this game is a mess, even after almost a year it still feels like an early beta build we should be testing for free. I just wanted to share my last fight on ufc4 until the next patch, there is so much wrong in this fight that i don't even know where to start, between the streetfighter 2 turbo speed that makes it a chore to walk people down or the ridiculous ko power elbows have i think unless the next patch's list of changes is as long as a cvs receipt i don't see myself re-installing. I had dude rocked, went for a body hook/head hook to finish and i almost get put down because of an elbow he threw during my combo while rocked? And you can't see it but in the beginning of the 1st round i had just CONNECTED with 2 body hooks and was countered and dropped by a spinning elbow while i was CROUCHED mid body combo, not to mention i have to chase people down to get into boxing range and once there I'm subject to a barrage of elbows (I've never seen an mma fighter throw a 3 elbow combo, you barely see 2 elbow combos outside of the clinch) 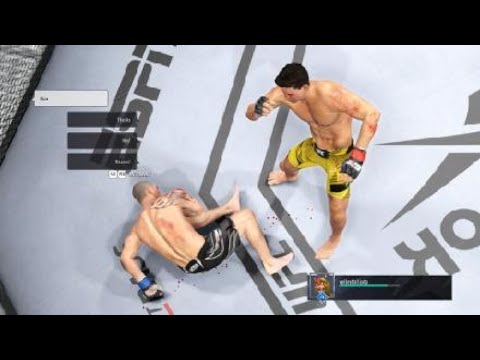